If any readers have been following my activities on Twitter, they’ll know I’ve been spending some time recently listening to an excellent archive resource at the Ure Museum.  This is the recording of a talk given to the University of Reading’s Atrebates Society* in 1967.  The speaker was Annie Ure, Curator of the museum at the University of Reading that now bears her (married) name.  The Ure Museum holds a digitised file of this talk, as well as a transcript.  So, having had experience putting short films together for a previous research project, I decided to see what I could make of the digital audio. 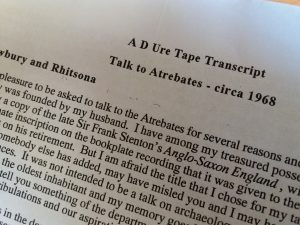 The result is a short film showcasing Annie’s views on suffrage.  I wanted this to be the first one of what will hopefully become a set, as it does two important things. One, it puts Annie’s voice together with a photograph of her which increases, I think, the potency and impact of what she has to say.  Two, it emphasises that archaeologists were part of a historical context, and they were passionate not just about the past, but about their present and future too.  And part of Annie’s context, as a young Classics student, was the suffrage movement.

As I’ve said on Twitter, I find this audio incredibly moving because it gives voice to the complexity of suffrage for those women growing up as it was going on.  Annie and her female contemporaries at University College Reading, as it then was, were taking part in the higher education that had in most cases previously been denied them, their mothers, grandmothers and so on.  That doesn’t mean that their support for suffrage was any less zealous than others, but each one had to consider what increasing political activity might do to her future.

Even if they decided to embark on suffrage action, they probably wouldn’t have done it on campus.  Their conduct was strictly regimented and closely watched; in her Atrebates talk Annie remembered the pressure on women students to ensure their activities on campus were carried out with “becoming decorum.”

But she and some friends would go off campus to hear Edith Morley, University College Reading’s first Professor of English Language and an ardent suffragist, take to a soapbox on Court Street to proclaim “No Taxation without Representation”.

You can hear Annie Dunman Hunt Ure on suffrage in the video above, or find it via the Ure Museum’s YouTube channel.

*named after the ancient people living in Berkshire during the Roman invasion of Britain.  Reading Museum has artefacts associated with the Atrebates in its collection.