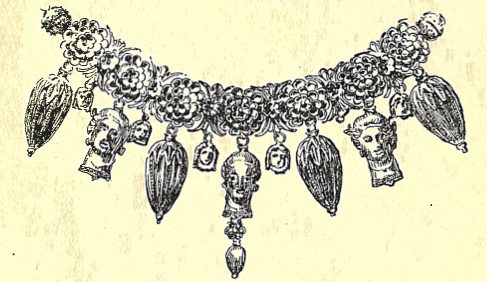 A few days after Leon had visited the gem cutter, he met him in the marketplace. They exchanged greetings and Sostratos said “I am due at the goldsmith with some engraved gems he has asked for. If you have no other pressing business, would you like to accompany me?”

Leon agreed eagerly and the two walked together. They arrived at a house, the front almost blank save for a strong door. Above was one small window closely barred. “This house contains much treasure”, said Sostratos, “and so is strong in defence”. He knocked on the door. It was opened an inch or so and, the gem cutter being recognised, the attendant admitted the visitors.

Sostratos led the way to the workroom, an apartment much like that of the coin strikers. The craftsmen were sitting at tables close to low openings that were strongly barred. There were a dozen or so workers bending over their work. Some had lighted lamps by them and at times they would apply a blow-pipe to the flame, directing its blue shaft of heat to the object on which they were working. Some were using shears to cut out leaves and flowers from thin plates of gold and silver, fastening them together into wreaths for bridal or funereal wear. Each table had a leather tray attached to it, which rested on the workers’ knees, to prevent the loss of minute pieces of the precious metals. A ray of sunlight falling across the room was flecked with brilliant specks of gold dust.

“Where is your master?” Sostratos asked the nearest worker, who replied that the goldsmith was in his room above.

They climbed a steep ladder-like stair and knocked at a narrow door. Leon was introduced to the master goldsmith, Polykles, an oldish man with a pronounced stoop. Leon could see flecks of gold in his beard. Polykles, evidently short-sighted, peered at the young man and said, “I shall be pleased to show you anything we do here. I am, myself, interested in Massalia, for my family long ago came from Phokaia, which sent out the colony. I have never despatched any work to the far West, most of it going in quite another direction. I have many dealings with Scythians beyond the Euxine.” He went on, “Pardon my curiosity, but the brooch-pin which fastens your cloak has caught my eye. May I look at it more closely?”

Leon unfastened his cloak and handed the brooch to the goldsmith, remarking it had been bought in Etruria and was undoubtedly old.

Polykles examined it carefully with his eyes close to it. It had a massive gold bow that was extended to form a catch for the pin. The bow was covered with strange prancing animals in silhouette, which on close inspection, were seen to be filled in with tiny granulations or minute globules of gold. There must have been thousands of them on the bow, although they were too small to be counted.

Polykles handed back the brooch saying, “I have myself done work of this sort but the fashion has never been popular in Athens. It is quite an easy matter to make the globules, by filing down a piece of gold and passing the particles through a mesh to ensure they are the same size. By heating them in charcoal dust the gold fragments become globules. Today we goldsmiths of Athens prefer another method – filigree – with which to enrich our work.” He held up a length of delicate gold braid.

“This is filigree. This piece consists of four twisted strands of gold wire.”

“How are such delicate wires held together?” he asked.

“Ah!” said Polycles, “that is the secret and also the secret of attaching the globules of which we have been speaking, to their base. Let us go below for a moment and watch the men at work.”

Downstairs, the goldsmith took them to one of the benches. The worker there was twisting a pair of thin gold wires. After the wires were wound together, he dipped them in glue that he was heating in a copper pot over a lamp. He held the wires for a moment or so in the flame of the lamp until the glue had hardened, repeated the process until he had several pairs of wires, laid them together side by side, brushed them over with the glue, and again dried the whole so that the wires cohered in a flat strip. The worker then placed the lengths of wire on the charcoal fire and applied a slight pressure of the bellows. With pliers he removed the filigree and held it before the visitors. Leon thought it perfect. All trace of glue had disappeared and the strands adhered together in one united strip of gold filigree.

Polykles took the visitors from bench to bench. They saw the goldsmith’s work in all its stages. One man was making a ring, another engraving the gold bezel of a ring, a third fitting a bezel of chalcedony, already engraved, into its circle. Here was one at work on a magnificent pair of earrings such as, Leon thought, Artemis wore on her coins; others were making brooches, pins, bracelets and especially necklaces. Some of these last were superb, being built on a foundation of gold filigree, from which hung beads, rosettes, pear-like shapes and a series of heads of Aphrodite. Leon asked to see some finished examples.

“Come upstairs again,” invited the goldsmith. “While you are looking at them Sostratos and I will settle our business.”

Leon, handed a casket of chains and other goldsmith’s work, pored over them while the others discussed the gems the engraver had brought and their setting. Leon chose a necklace for his mother, a ring with a blood-red bezel (one of those stones Hippias had brought from afar) for his father, and a bangle for his sister. He arranged to collect these gifts from the goldsmith before he departed for home.

“As you first entered,” said Polykles, “I was about to weigh something which has come as far from the East as Leon has from the West. Be pleased to try the weight of this small bag lying on the table.”

Leon made to lift it and was surprised to find how heavy it was.

Polykles smiled, put in his hand and drew out a palm full of gold nuggets, peas and grains. “This gold has come from Olbia on the Euxine,” he said. “My agent there received the gold from the Scythians and we return it made up into rings, diadems, earrings, necklaces and the like. The Scythians are by far our best customers, nowadays.”

Leon left at last, his eyes somewhat dazzled by such wonders. 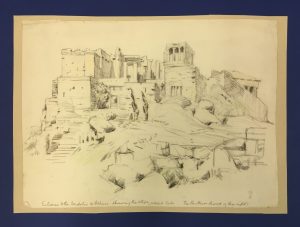