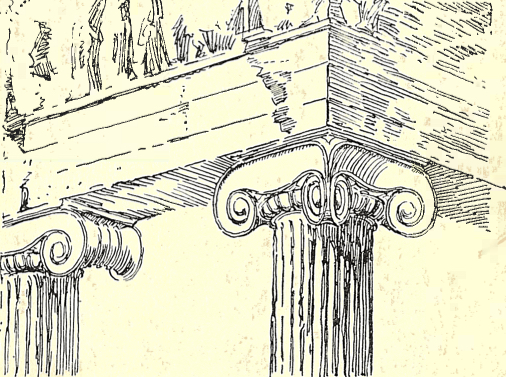 Diokles had talked about the masonry being prepared in the yards below the Akropolis and invited Leon to come and look round. He called a few days later.

There was much going on there. The tap of hammers, the hiss of long saws cutting through great slabs of stone, men pulling and tugging at blocks or using levers and crowbars. “Stand back!” someone shouted in his ear, and Leon skipped aside as two men trundled a great block of marble weighing more than a ton. He marvelled at the clever way of moving the stone: wide hoops of wood had been fastened round it, so that it rolled easily.

Just then Diokles came up and greeted Leon.

“We are busy here as you see. Those fellows over there are “trueing” the blocks with mallet and chisel. The stone has already been roughly dressed in the quarry. The masons here chisel the block to just outside the required measurements. If they take off too much there’s trouble coming to them. The surface exposed on the building is left rough. You saw that being removed the other day.”

“What would you like to see first?” To my mind the most interesting is the way we prepare the blocks so that they can be moved and hoisted without damaging their surface. We’ve got beyond the Egyptians’ plan of setting up inclined ramps of earth and hauling the blocks up them. Of course they had plenty of haulers to do the work. However, we have no difficulty in moving our comparatively small blocks.”

“I was wondering”, said Leon, “what the holes in the blocks were for. Almost every block seems to have one or more holes cut in it. There were no holes to be seen in the walling.”

“No”, laughed Diokles. “None of the holes are on exposed surfaces, but if you pulled the temple down you’d see plenty. Look at this block near us: on either end, as you note, curved grooves are sunk. Cords can be fitted into the channels and connected with a hook at the end of a rope.”

In another part of the yard several capitals were being roughed out. On the plain face of one, a man was tracing the subtly curved volutes, using a template of thin bronze. In a corner men were working on bases and Leon noticed that gauges were used to obtain standard sizes.
“And here you see lengths of moulding carved roughly,” said Diokles. “We Greeks pride ourselves on our mouldings. The Egyptians used a great hollow moulding above their doorways and a roll beneath the hollow, but that’s as far as they got. We know how the effect of our marble buildings is enhanced by good, well decorated mouldings. We avoid the use of the circle when we can, especially for mouldings. The geometricians have helped us. If you look at the curve of the capital on the Parthenon, you will see one of the most subtle curves ever drawn.” Diokles took a piece of chalk and sketched it on a flat slab of stone.

“Here is the contour of the Parthenon capital. The curve continually flattens until by look or touch you cannot distinguish it from a flat surface. Our scientists call such a curve hyperbola. I regard the Parthenon capital as one of the triumphs of Greek art.”
The talk turned to the marble of which the temples had been built. Diokles beckoned Leon into the open and pointed to Mount Pentelikos, in the distance, from where all the marble used on the Parthenon came.

“The temple now glows with its gold, blue and red. But, when I saw it newly completed as a small lad – gleaming white against our blue skies – I regretted that there had to be more work done on it. Pentelic marble darkens after exposure to the weather, however, and in the course of time the white of the marble sinks to a wine-coloured hue. Colour is therefore useful, to hide this change.
Leon remarked he would like to visit the quarries where the marble was obtained.

“You can do that and soon”, said Diokles. “Tomorrow I have to go to Mount Pentelikos to confer with the overseer there. We will walk and make a long day of it. Agreed? I will meet you a little before sunrise outside your lodging.” 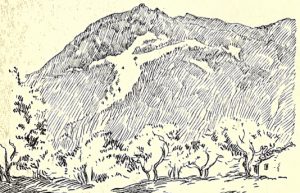