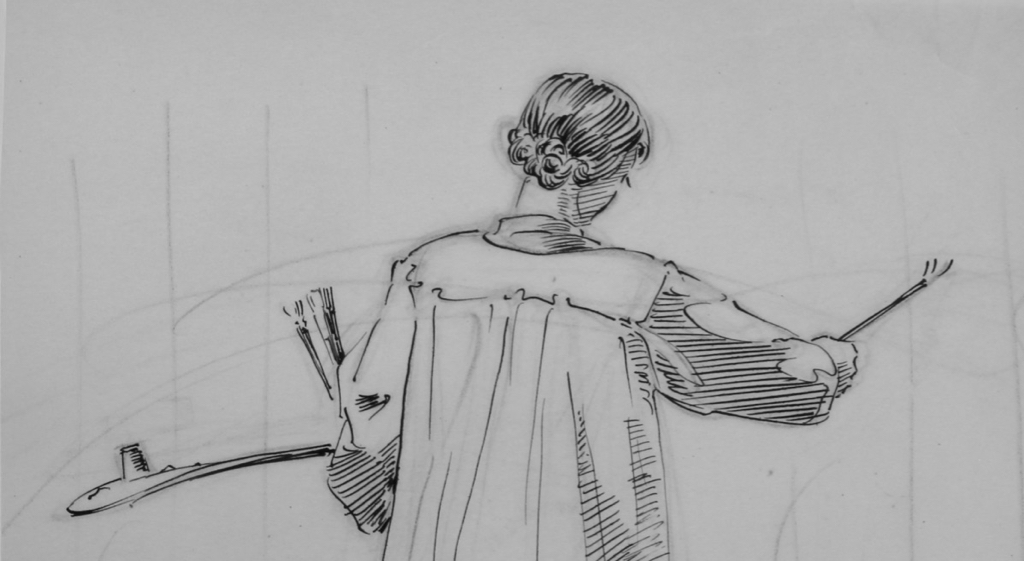 The painter painted Pythagoras himself
whom you had seen with a voice, if
Pythagoras had wished to speak.

The next morning Leon made his way to the studio of Parrhasios. Soon after, Zeuxis arrived, a slave carrying his picture. The painter looked round and, seeing an empty easel, directed his servant to place it there, but to leave it covered. Then he said, “Leon of Massalia, you are about to arbitrate in a contest between the two greatest painters in the world. Judge not lightly, for the reputation of men such as we will not soon fade. Future generations will learn with interest of what happens here today. As an apple was the prize awarded for Paris’ judgement, Parrhasios, have you a fruit here that Leon may award to the victor?”

Parrhasios clapped his hands and a slave was ordered to bring in some fruit. He soon returned with a gold dish of figs and other fruits, among them an apple. This was placed on a small table at Leon’s right hand.

Then Zeuxis approached his shrouded picture and made as if to remove the covering, but suddenly withdrew his hand. Turning round, he said, “Before revealing my painting, I will tell you a curious thing that happened to this picture. It is a simple subject, a bunch of grapes in a crystal dish. After it was finished, I took it to the roof of my house so that the sun would dry the varnish with which I had enamelled the surface. Early in the morning my studio servant went up to the roof before any others in the house were awake in order to check the painting. As he reached the topmost step he saw the picture as it had been placed, undisturbed, but to his surprise he also saw a pair of small birds pecking at the painted grapes. When they saw him they flew away and my servant, having ascertained that there was no damage, came down and woke me to convey the strange news.”

Zeuxis raised both hands as if to say Parrhasios was impossible to argue with, then turned to his picture and unveiled it.

Leon uttered an involuntary exclamation for the picture against the quiet studio wall shone out with the glowing colours of reality. A great bunch of purple grapes lying amid its sun-stained leaves rested on a crystal dish. A single leaf and one or two grapes lay on the table, against the dish; the background was a clear tone of warm grey. The bloom on the grapes and the green of the leaves showed clearly, while the glittering lights of the crystal dish were rendered to perfection as were the reflections from the polished surface of the table. Leon failed to see how any work by Parrhasios could improve upon it. “I can well believe the birds pecked at the grapes.”

“Now Parrhasios,” said Zeuxis, “let us see what you can put against my painting.”

Parrhasios walked to his easel and turned his panel round. There was a dark area at one side but a patterned curtain obscured the rest of the panel.

“Don’t keep us waiting,” exclaimed Zeuxis, “remove the curtain and reveal your masterpiece.”

Parrhasios merely smiled and bowed, standing by his picture.

Zeuxis took a hasty step forward and then another. “Oh,” he exclaimed, “it isn’t fair. It’s a trick.” He advanced threateningly towards his rival then, turning again to look at the panel, burst into laughter.

“Come closer Leon,” he commanded. “What a trick to play. A painted curtain!”

He walked towards the dish of fruit, snatched at the apple, made as if to throw it at Parrhasios, then tossed it to him. It was deftly caught and the catcher took a bite.

Leon was examining the panel closely. “Why,” he said, “the paint’s hardly dry! This corner is sticky.”

Parrhasios laughed and confessed that while resting an idea had come to him. He had risen at daybreak and worked at his panel until the very last minute.

“Well, Paris,” scoffed Zeuxis, “what are you going to do about it?”

“It’s evident that I cannot award the apple,” answered Leon, “for Parrhasios has eaten it, but I think we are all agreed that Zeuxis has painted a marvellous picture, and that Parrhasios has justified his little lecture of last evening. His panel, however, is not so much a picture as a fragment of reality.”

Zeuxis was again looking closely into his rival’s picture. “What new method is this?” he asked. “The panel is neither painted with pure colour on the damp plaster, nor with any other known means. I much admire the richness of the brushwork. If only I could have used the method for my grapes they would have appeared even more luscious than life.”

“It is certainly a new process,” said Parrhasios, “but no secret. The panel was painted with wax.”

“Yes just wax. Surely you have seen coloured waxes used on floors and other woodwork. One day a servant who had been rubbing my studio floor with honey-coloured wax, carelessly left a lump of it behind on a white panel near the stove. The wax had melted and run over the panel. I was delighted and surprised to note what a beautiful surface this coating exhibited and how the depth of colour varied with the thickness of the wax. Rubbing a waxed surface with a soft rag brings up a superb gloss, better than any applied varnish. It was easy to mix up various coloured waxes, put them in pots round a charcoal fire, and then, with palette and brush, spread the colour. One can put the panel by and take it up again months later. Nor is there any difficulty of paint flaking off or cracking for heat has united the surface into a single whole. There is only one caution. I mustn’t put this or any other wax panel, as you did yours, out in a warm sun, for it might melt and run together.”

“Come now and experiment for yourselves.”

“We will, excellent Parrhasios,” said Zeuxis, “but all this talking has made me both hungry and thirsty. Let us go to the nearest inn; I’ll pay.” 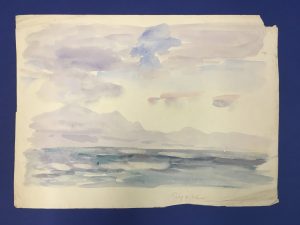