Against the bulwarks
The ship-men standing, wait,
Strong sturdy forms with vests of white

Leon stood in the bows of the galley. He was explaining matters to the captain, who said that on rounding the point before them they might see the sail of the ship they were pursuing. She must be deep in the water for she carried a cargo of marble.

The lip-lap of the water against the galley’s bows steadied Leon’s spirit. The agonised apprehension of the last hour changed rapidly into buoyant hope. Soon he was to see Eugenia. He had already been relieved of his worst fears, for both Doula and the harbourmaster had testified that she was alive and unharmed.

The galley rounded the headland and Leon strained his eyes, scanning the open sea. “There she is”, said the captain, pointing to a speck almost on the horizon. At his command the galley increased its speed, cleaving the waves. Spray flew up and drenched Leon where he stood. As he noted the distance lessen between the vessels his thoughts turned again to Eugenia. She was not yet saved.

Once within hailing distance of the cargo ship, Leon noticed that her oars had been put out, perhaps as soon as her captain realised a pursuer was on their track. Her great sail was hoisted to its full height and drawn taut to catch the most wind.

“Perhaps they think we are pirates,” said the galley’s second in command. “Hoist our pennant. That should tell them who we are. Stentor, go to the fore and call to her.” One of the guards, so nicknamed because of his strong parade-ground voice, cupped his hands round his mouth and shouted commands to those on the merchant ship.

There seemed some uncertainty aboard the cargo ship, for the sail was not immediately hauled down and, the wind dropping, the galley forged ahead. As the command to stop was repeated and the merchantmen were lowering the sail, the wind strengthened again. This sudden gust caused the ship to turn into the path of the oncoming galley. With a resounding crash and a noise of splintering wood, the galley’s beak smashed hard into the cargo ship’s stern. The stricken ship heeled over with the shock, then righted herself. Leon could see water pouring in through the hole. Shouts arose: “She sinks, she sinks!”

“That’s done it,” said the galley’s captain in Leon’s ear. “With that cargo aboard she can’t keep above water long.” To his men, “Keep your oars out lads and an eye open for swimmers.”

With a refuge close by the sailors on the sinking vessel had no intention of trusting themselves to the sea. When they heard the crash and saw the water pouring into the hold they left off furling the great sail and rushed to the stern, tumbling on board the galley and nearly knocking Leon overboard.

Several feet now separated the two vessels. Leon took his chance, threw off his cloak and jumped, landing on the stricken ship’s deck. He nearly stepped on a body lying prone; the man had been impaled by a great sliver of wood. Leon rushed towards a man standing uncertainly by the mast, who, judging by his dress, was the captain of the cargo ship.

“Where is the lady?” demanded Leon.

“The female slave? In the after hold. I had forgotten about her.” Just then they heard a wail.

Leon rushed forward, stumbling over ropes, bales and the folds of the great sail flapping to and fro on the lower deck. He reached the cabin and stood before the closed door. There was no handle only a big key hole. He tore at it with his fingers in vain, calling on Eugenia and from within she shrieked, “Quick! Quick! the cabin floor is flooded.”

“Allow me”, came the captain’s voice from behind him. He produced a great key, inserted it into the lock and, with an effort, turned it and threw the door open.

“I’m tied to this bolt,” she returned.

Leon could see little in the gloom, but he reached for the girl’s arms. She was sitting on a bench with her tied hands on her knees. She held them up and Leon felt a bandage round her wrists that was also fastened the seat. He fumbled with the knots and the captain called from outside, “Hurry. I can stay no longer.”

Leon suddenly remembered his dagger. He had it from its sheath in a moment and slashed at the bandage near the fastening. While he dragged the girl out of the hole, she held out her hands, still tied. Leon sawed between the girl’s wrists until she was free. Then Eugenia bounded on to the bulwark and stood with a hand grasping a rope, Leon following.

The cargo ship was sinking fast. Midway between the two vessels was the captain, battling the waves.

“Jump, Leon!” cried Eugenia. Leon stood by her side and looked about him. “I need a loose plank. I can’t swim.”

She grasped Leon’s hand and jumped, pulling him down with her into the sea. Leon went under, but emerged in a moment, spluttering. Eugenia had her arm firmly round his shoulders, holding his arms at his sides while striking out with her free arm.

“Keep still,” she panted, “let yourself sink low. See, I am keeping your chin above water.” Leon allowed himself to be towed along. The sailors on the galley were standing up and shouting directions. The captain, who had nearly reached safety, turned to see what had become of his ship and, noting the two behind him, swam back to their aid amid the cheers of those on board the galley. Reaching Leon, the captain supported him on the other side and the three made steady progress towards the vessel. They reached the bow oar and Leon clasped it with relief. Willing hands gripped them and drew them aboard.

Leon sank on the deck and Eugenia did the same beside him, covering her face with her hands. The captain of the galley came bustling up. “You will find dry clothing in my cabin.” He pointed and Eugenia slipped away while Leon found his discarded cloak. The captain then turned furiously on the circle of men who had gathered round and cursed them so savagely that they were glad to regain their stations.

When the galley was on her homeward course he turned to Leon, “Well young sir, you saved the lady or she saved you!”

Soon Eugenia appeared, draped from head to foot in a great sailor’s cloak, only her face and a few stray locks showing. She looked for Leon and flashed a smile at him. It was good to see her alive and well.

The galley had rounded the point and made for the harbour. Leon could see a throng of people clustered on the quay. In a few minutes they were close in. Ropes were thrown and the men shipped their oars as the galley came alongside.

Leon helped Eugenia onto the quay. There was bustle just ahead of them for a newly-arrived ship was disembarking its cargo and passengers. The harbourmaster was standing by the vessel, talking with a tall grey-haired man.

“Let’s go and thank the harbourmaster,” suggested Leon. At that moment the stranger turned his face in their direction. Eugenia gasped and, arms outstretched, ran towards him. She fell at his feet, “Father!”

The stranger looked down and exclaimed, “Eugenia, my daughter! What are you doing here? And without Doula? Why, your hair is wet!”

The harbourmaster interposed, “Demetrios, it’s a long story. Your daughter has had great misfortune, not to say peril, and Leon here has rescued her.”

At that moment, there came to them a clattering of hoofs and wheels on the rough stones of the quay. Amid shouts of alarm, Archippos reined in his horses. He jumped down and lent a hand to assist someone crouching in the chariot.

It was Doula. She stood up and swayed as if dizzy. Then, recovering herself she ran forward and threw herself on the stones before Eugenia. “My mistress. My dear one,” she sobbed again and again.

Demetrios raised his hands in a gesture of utter bewilderment. “Come,” said the harbourmaster briskly. “We can talk in my office,” and he led the way. As he turned there stood before him the captain of the galley. “Bring me that rascally trader and the master of the cargo ship.”

“The master is here, sir, but the trader is dead, and the ship is sunk, rammed accidentally by our rostrum.”

“Is that so? The trader will have saved himself much inconvenience. You’d better bring the master and come along yourself. This Syracusan gentleman will want an explanation soon.” 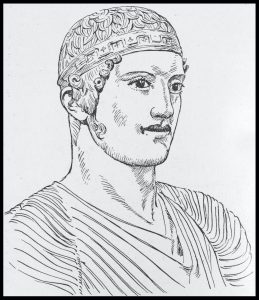