As we launch a new term at University of Reading it is opportune to remember two erstwhile members of our Department who passed away within days of eachother in October 2021: Professor James Noel Adams and Dr Timothy T.B. Ryder. Jim and Tim, as they were known, both blessed Reading with their presence in the 1990s but barely overlapped. From 1995–1998 Jim was our Professor of Latin and Head of Department, and thereafter Senior Research Fellow at All Souls College, Oxford. Tim came to Reading in 1991 as Reader in Greek History and retired in 1995. Despite obvious differences — Latinist Jim, who earned his PhD at Oxford, hailed from Australia but avoided foreign air travel, while the English Hellenist Tim earned his PhD from Cambridge and travelled widely throughout his long life—both were sportsmen as well as academics, kind and sharing colleagues, and dedicated teachers. For memories of Jim, widely recognised in his life as the world’s greatest Latinist, please see his obituary in The Times published 22 December and further comments by our Prof. Em. Jane Gardner in The Sunday Times published on 31 December 2021. The memory of Tim, posted here, is adapted from his own words, written shortly before he passed away peacefully at his home in Sheffield. I am grateful to his daughter, Penny Burnham, for providing both text and illustrations. 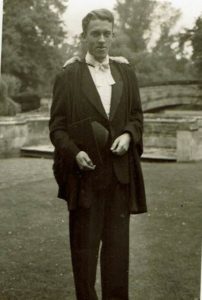 “I was born in Claygate, Surrey on 11th January 1930, in my parents’ house. My three-and-a-half year older brother Sam and I had a happy childhood. In 1936 I started school at Milbourne Lodge School along the road. Although my parents did not drive, we visited my grandparents in Surbiton (maternal, Sanger), where I often saw my only first cousins Mella, Clyde and Jimmie, and Eastbourne (paternal, Ryder) frequently. Once WWII bombing had begun, and the next door house in Claygate had been hit, we spent all our school holidays in Eastbourne. In 1939 I joined Sam at Boarding School: St Cyprian’s, which had been in Eastbourne but had been burnt down in the summer so had moved to West Sussex and then moved again, while I was there, to rural Gloucestershire. I showed academic promise so took exams to enter Summerfields in Oxford for 5 terms in 1942, a notorious Eton Entry Prep School, where I made some lifelong friends [Ed: Tim made lifelong friends everywhere he went thereafter].

I was a Foundation Scholar (Colleger = scholarship students) in the 1943 election at Eton, where I excelled academically and also enjoyed a lot of sport: the field game in the autumn term, soccer in the middle term and cricket in the summer term. Annually on St Andrew’s Day the Collegers play the Oppidans (fee-paying students) in the unique Wall Game. I was conscripted for National Service in 1948 (Royal Artillary). Upon my release, I took up my Foundation Scholarship place at Kings College, Cambridge in 1949. I played cricket for Kings and took up squash as there were courts to play on. When I graduated with an MA in 1951, I made the choice to not join my father’s Accountancy firm in the City of London articled to one of his colleagues, but to carry on with an Academic life to do a PhD at Kings. I was lucky to visit Greece in 1951 and Italy in 1952. Indeed I would not have met my wife Jill in Rome if I had not been studying there at the British School.

We were married at Easter 1955 in Cambridge and lived in a rented flat on Chesterton Road. I landed a job as Lecturer in the Classics Department at Hull University as I was completing my PhD. We moved to our first house, in Hull, in October, and Penny was born in March 1956. Although I always cycled, I learnt to drive and we bought a Morris Minor in 1959 so we could get to visit people more easily. We moved to a much bigger house at 126 Newland Park in 1961 which Jill set about furnishing with antiques bought at auction. Pippa was born in January 1962. In 1968/9 we bought a cottage in Lastingham on the North Yorkshire Moors, which we spent a good deal of time at, enjoying walks and fresh farm eggs, as well as gardening.

In 1966-67 I took a Visiting Professorship in the History Department at Michigan State University MSU. Meanwhile I rose steadily through the ranks at Hull University: Lecturer in Classics 1955-66, Senior Lecturer 1966-71, Reader in Classics 1971-84, Head of Classics 1984-90, Acting Head of School of Humanities 1986-87, Dean of Humanities 1987-1990, when the new Vice Chancellor closed the Classics Department. We were a close-knit team and all found work elsewhere.

I transferred to Reading University for my final 5 years. Jill and I bought Marshalls Hill, 47 Cressingham Road in 1993. Pippa was married to her Martin in 1998 and Hazel my youngest grandchild was born in 1999 in London, so we saw them frequently until they moved to Whitley Bay. We lived together in Reading until Jill died in 2013. Then I lived alone, latterly with help from my Chrysalis Carers, my cleaner Jan, my gardener Jayne, and wonderful neighbours Joan and Alan & Maxine, until July 2020 when I moved to Sheffield to be near Penny, her Martin, her children Kate (1986) and Tom (1987), and their children – my 3 great grandchildren: Olive, Ted and Tilly, who I enjoy enormously.

Throughout my working life, I taught hundreds of undergraduate and postgraduate students, many of whom continued to exchange news with me at Christmas. I enrolled many Hull students onto their courses, as I was the Admissions Selector for Classics from 1969. I was also an External Examiner—ratifying Degree and Masters and PhD marks—for the National University of Ireland for 15 years, for the National University of Wales for 5 years, etc. I also gave many, usually evening, talks to Classical and Historical Associations around the country. The annual Sixth-form Classical Conference at Caistor for pupils from several Lincolnshire schools was only the main event of my working with schools. The Minimus Latin course for children in Hull gave me great hope for the future of the subject. I enjoyed the Classical Association Conference each summer, enabling me to see other universities and to catch up with other Classicists.

As I had enjoyed Sport at school and university, I joined the Hull & East Riding Sports Club, where I played Squash several times a week. For many years I administered the Hull & District Squash League, which grew and grew as there were teams at many Hull firms, at many Sports Clubs, at Hymers College and the University. I made many good friends among Squash players, from all walks of life. I was sad that I had to give it up when we moved to Reading, due to too long a gap in playing to restart at that age. I think of myself as a Hull City football supporter still, although I only went to one match with my father-in-law in the 1960s.

Starting from an Evening Class which I taught at Hull, I organised and led Tours of Classical Sites all over Europe and North Africa in the Spring from the 1980s through until 2018: the final trip was to my beloved Greek Peloponnese. The Tim’s Tours Travelling Friends therefore number many, with Margaret Nicholson, and later, Phoebe Hilary and Leonard Fuller always present. I enjoyed the planning and the tours enormously, and hope that all those with me did too.”

Timothy T.B. Ryder is remembered as an excellent Classicist and teacher of Classics, and as a loving husband, father, grandfather and great-grandfather, as well as a skilled administrator, guide, correspondent, and mentor to many. His family asks that he be remembered with one of his favourite Latin quotes:

Quique sui memores alios fecere merendo / These who have ensured their remembrance by their merits (Virgil, Aeneid VI.664)