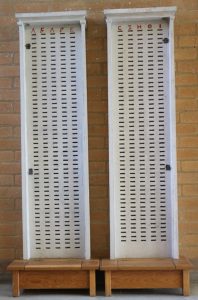 These two stelai (upright slabs) are working reconstructions of kleroteria made out of marble dust. Each of the ten phylai (tribes) of Classical Athens used a pair of kleroteria to choose juries. The ten kanonides (columns) in each pair represent the sections into which each phyle was divided. Each citizen was given a pinakion (token) marked with his name, deme (village) and allocated section of the phyle. The markings at the top of each kanonis (column) are the letters A-K in the Ionian alphabet, each representing a different section of the tribe. The citizens put their token in one of the two kleroteria, in the kanonis assigned to their section. Some black and white balls were mixed and poured through a funnel into a tube in the side of the kleroterion; the balls were released one by one and determined the jurors. If the first ball was black, the people with tokens in the first row would not be on the jury. If the second ball was white, the people with tokens in the second row would be on the jury, and so on.

Congratulations! You have now finished your tour Beyond the Ure, a sculpture trail around the Edith Morley Building at the University of Reading.