On this 900th anniversary of the founding of Reading Abbey, UoR Classics takes the opportunity to highlight one of many connections between Classics and medieval Britain, with this guest blog post from one of our former Erasmus students, Adél Ternovácz, from Budapest, Hungary. Here Adél explores how ancient intaglio gems—many latex and plaster casts of which are found in the collections of our Ure Museum— found new lives in the palaces and abbeys of medieval Britain and Europe, such as Reading Abbey. 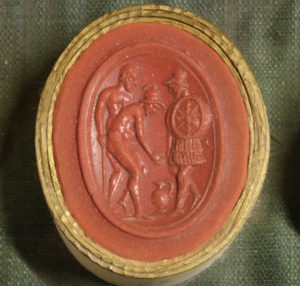 Since the Bronze Age, gem stones were carved with images of myth, various deities and scenes of everyday life. Beyond their usage as ornaments and amulets, their primary function was as seals, often mounted in rings. Although the art of gem carving ceased in Europe during the 4th century AD, the gems’ history didn’t end with the fall of Roman Empire. As treasures and objects of antiquarian or archaeological interest, engraved gems attracted continuous interest throughout the Middle Ages, and their reuse, in particular, can tell us much about how medieval cultures related to the classical tradition.

In the high Middle Ages in Britain, between the 12th and 14th centuries, many ancient gems returned to their original function, as seals, and were set in seal-matrices, engraved or inscribed metal devices used for making impressions in wax. Seals played an important role in medieval documentary culture, as a means of authenticating historical documents. As several Latin texts were available and early 13th century Anglo-Norman lapidaries (books, containing tales of magic qualities possessed by different kind of stones, including engraved gems) mentioned Roman deities, some elite seal users were well versed in classical mythology and aware of the meanings of the images on gems they owned. A sard intaglio set into a silver ring from the 14th century, now in the British Museum’s collection (shown at right) shows a seated Venus with the French legend IE SVI SEL DE AMVR LEL (‘I am the seal of loyal love’). This could mean that the seal owner was aware of the classical identity of Venus and employed her image intentionally as a gesture of his belief in love.

What was the role of ancient magical gems in the Middle Ages? The term ’magical gems’ refers to amulets of the Roman Imperial period designed to bring their owners health, prosperity and love. Hubert Walter, Archbishop of Canterbury (1193-1205), was buried with a ring with a translucent green gemstone from the 2nd century AD (shown at left). The gem depicts the Graeco-Egyptian deity Chnoubis, with a head of a lion and a body of a serpent. According to ancient sources (e.g. Hephaestion of Thebes, Apotelesmatica 4.1., end of 4th century AD) Chnoubis-gems (e.g. Ure 2009.9.31) served as healing amulets for stomach pain.

A question arises: what might have led high-status clerics, who were probably well-versed in classical literature, to wear pagan Roman gems on their fingers? Some scholars assume that they expected to derive some therapeutic value from the stones. However, there is no written sources to assist us, so we need to approach this question very carefully. Ancient gems were rare and expensive objects. Incorporating them into rings was a way of displaying one’s wealth, sophistication and taste. These objects were popular with elites and through them they saw the renewal of antiquity’s glory (gloria vetustatis). 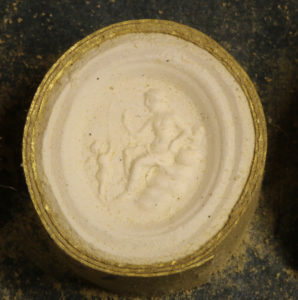 The hundreds of wax impressions of gem seals found in contexts such as Reading Abbey evidence a practice of gem use otherwise unknown, because most of the precious religious and historical monuments were lost during the iconoclastic battles of the Reformation. After Calvinist leaders encouraged the removal of religious images, civil authorities and individuals attacked and removed statues and images which had filled the medieval churches and only rare pieces survive in Britain today.

Henig, M. (2008) ‘The Re-use and Copying of Ancient Intaglios set in Medieval Personal Seals, mainly found in England: An aspect of the Renaissance of the 12th Century’, in Adams, N., Cherry, J. and Robinson, J. (eds) Good impressions: Image and Authority in Medieval Seals. London: The British Museum, pp. 25-35.

Kagan, J. (2010) Gem engraving in Britain from antiquity to the present. With a catalogue of the British engraved gems in The State Hermitage Museum. Studies in Gems and Jewellery. Vol. 5. Oxford: The Beazley Archive and Archaeopress

Simonet, C. (2019) The (Re-)Use of Ancient Gems and Coins: the Presence of Antiquity in Medieval Sigillography’, in Whatley, L. (ed) A Companion to Seals in the Middle Ages. Reading Medieval Sources. Vol. 2. Leiden-Boston: Brill, pp. 355-96.