Alongside our specimens is a small collection of artwork illustrating plants predominantly from Europe. The major collection is that of Jill Smythies.

Jill Rogers was first instructed to press, study and paint flowers by an inspiring botany mistress at school, 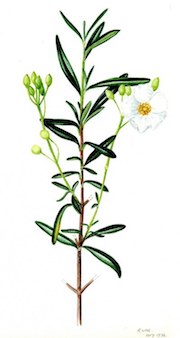 winning a school prize at Woodford School, Croydon, Surrey for two albums in 1935. However, this activity lay dormant for many years and surprisingly she appears to have only returned to natural history on her marriage to Bill Smythies in 1964. Bill retired from the Sarawak Forest Service shortly after his wedding and the couple moved to Spain in the same year. It was then that Jill took up her painting activity again, starting with the flora around their villa in Estepona. Meanwhile Bill researched the Spanish flora, for Flowers of SW Europe, co-authored with Oleg Polunin and including Jill’s line drawings. Bill also published his ‘Flora of Spain and the Balearic Islands: checklist of vascular plants’ in Englera 3(1-3): I-XXXIV, 1-882 (1984, 1984, 1986).

Bill writes about Jill in his correspondence:

“She was not born an artist like Walter Hood Fitch, who could draw a plant freehand on a lithographic stone and get it right first time, without having to correct a line. Jill’s pictures only emerged after much toil and sweat, erasing of lines and redrawing. To improve her technique she enrolled in the Flatford course three years running: 1967 and 1969 with Derek Erasmus, 1968 with Mary Grierson.

“‘In gantry again with Sybil Panton and Hilary Broad. After supper talking in group with M. Grierson, Hilary and others.’

“Her last course was at Nettlecombe Court in July 1979 with Claire Dalby on black and white illustration.

“When we left Spain in June 1979 [for Richmond, later Merstham, Surrey] (we have not been back since), Jill had completed 787 illustrations [not counting the ones done for the late John Carr for his Magnum Opus on the distribution of the vascular plants of Andalucía].”

John Carr organised a series of expeditions to Cádiz, Málaga and Granada to record plant distribution using the 10 km squares of the UTM grid, and Jill joined a number of these as botanical artist in residence. All her paintings in John Carr’s collection are also represented in her collection as first attempts, and these as well as the final John Carr version are available for examination on our website. Further details of this mapping project are given by John Carr in B.S.B.I. News [Botanical Society of the British Isles News], 13: 25 – 28 (1976) & 17: 22 – 23 (1977) and in his obituary by Bill Smythies and Eric Clement in Watsonia: 12: 381 – 382 (1979).

Sadly in 1973, Jill suffered a disability and the use of her hand and her drawing and painting activities came to a sad end. Following this Bill endowed The Linnean Society of London with The Jill Smythies Award for Botanical Illustration, a prize for botanical drawing which contributes to plant identification. It was appropriate that Claire Dalby, sometime Jill’s tutor should be one of the winners of the Jill Smythies Award!

Later, Jill was to suffer a series of four strokes. The first in March 1989 was not too severe, but the third in January 1992 destroyed her sense of balance, so that she was only able to walk with a Zimmer frame. Tragically, her life became a torture until her death on the 14th June.

In 1994, Bill presented The University of Reading Herbarium with Jill’s collection of plant paintings, c. 900, mainly from Spain. These all contain collection locations and dates meticulously recorded on separate index cards and are, therefore, scientifically very valuable. They also show the development and maturation of a botanical artist from 1964 until 1973,

We acknowledge a student bursary from The University of Reading Joint Standing Committee on the Arts which has allowed the employment of Kate Warner to scan the paintings ably assisted by Mr Greg King.. Thanks are also due to Hilary Broad, née Carr and Rosemary Wise for supplying letters and information.