David Moresby Moore was a British botanist, considered to be an expert on plants from South America and the South Atlantic. His specialty, though, was Patagonia, specifically Tierra del Fuego and the Falkland Islands.[1] In October 1961 Moore took one of his first expeditions to Chile, eventually making his way down to the furthest reaches of Argentina and finally arriving at the remote archipelago of Tierra del Fuego.[2] 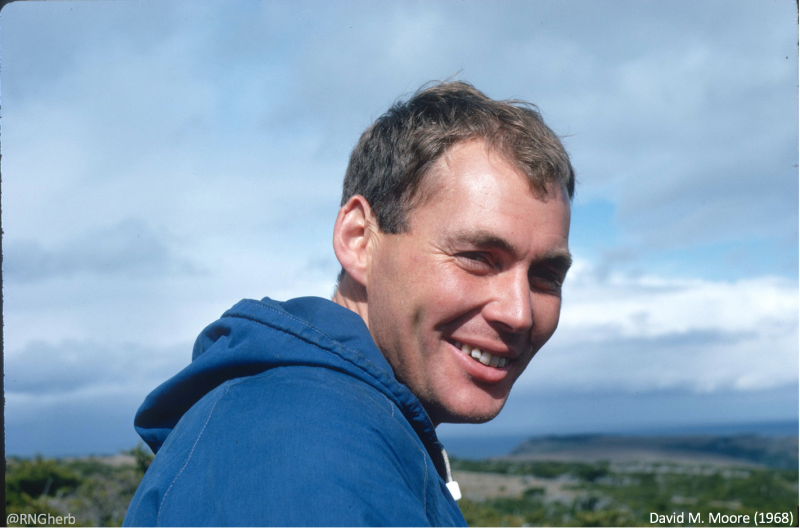 He would end up visiting Tierra del Fuego and the Falkland Islands multiple times throughout his career and the local vegetation played a highly instrumental role in his career. Moore wrote The Vascular Flora of the Falkland Islands (1968), the first true flora produced for the region, as well as the Flora of Tierra del Fuego (1983). He also acted as co-editor and contributor of Transecta Botánica de la Patagonia Austral (1985), a publication that had never been attempted before for Southern Patagonia. Moore’s work broadened our knowledge of the Antarctic Floristic Kingdom and created a solid foundation from which additional research of these alpine habitats could be built.

Moore began his teaching career as a lecturer at Leicester University in 1961. In 1968, he moved to University of Reading to the Botany Department under Professor Vernon H. Heywood, where he stayed for the remainder of his career.[3]

RNG houses approximately 6,000 of David M. Moore’s specimens, many of which were collected from Tierra Del Fuego and the Falkland Islands and as a part of Transecta Botánica de la Patagonia Austral. Unfortunately, the majority of them are not currently available online.

Transecta Botánica de la Patagonia Austral (TBPA) is a unique publication in that it was the first to produce distribution maps of the plant species along the Southern coast of Patagonia at 51° to 52° S latitude. Structured collections of this type rarely exist!

This publication and the work that went into developing it shows strong evidence of the UK, Argentina and Chile working together in the name of science. Many of the specimens collected for the purpose of this publication are housed in RNG.

Earlier this summer, RNG began digitising a portion of Moore’s Patagonian collection, with the goal of 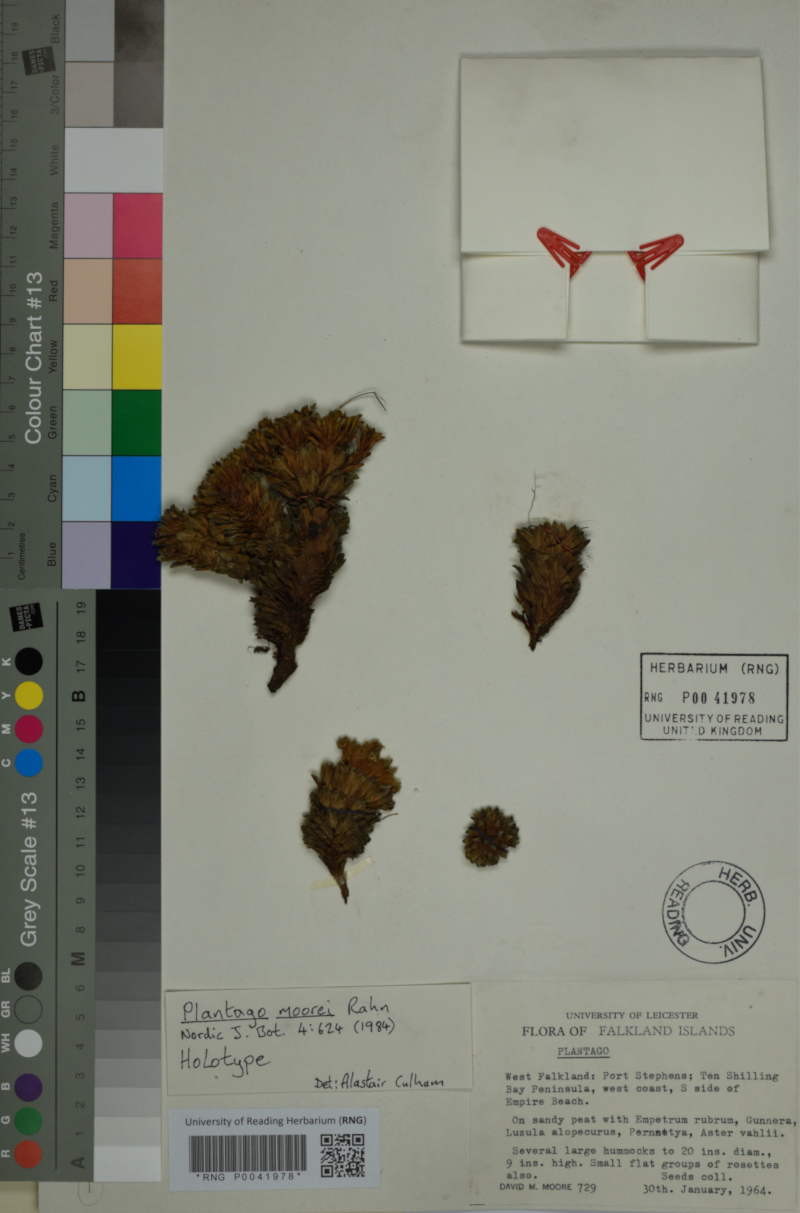 eventually having all 6,000 + of his specimens available as an online resource. Due to the size of Moore’s collection, Curator Alastair Culham and current MSc Plant Diversity student Lauryn Gilroy, decided to focus specifically on Plantago from Temperate South America, in honour of Plantago moorei Rahn or Moore’s Plantain.

In 1964, during one of his earlier expeditions to the Falkland Islands, Moore collected a flowering, cushion-forming Plantain with densely packed leaves, covered in white hairs.[4] Originally labelled as just “Plantago”, this specimen would not be described as a new species until 1984, when it was aptly named after its collector.[5] The holotype for P. moorei Rahn is held at RNG. Moore’s Plantain is endemic to the Falkland Islands, and despite being well adapted to survive in harsh environments, it is considered to be at the “threshold for Critically Endangered” category by the IUCN Red List of Threatened Species.[6]

Focusing on Plantago, an additional decision was made to digitise all of the Temperate South American Plantago specimens held in RNG, not just Moore’s. This includes specimens collected for the development of the Transecta Botanica de la Patagonia Austral, some of which Moore is listed as a collector, and newer more recently collected specimens.

Making all of these specimens available online could potentially help produce updated distribution maps to those made in the original Transecta Botanica de la Patagonia Austral or create climate maps which could be used for conservation purposes.

We are currently in the process of making these newly databased and imaged specimens available via the University Enterprise Database. In the meantime, check out images of the specimens here!

Click here to see more images from Moore’s trips to Patagonia throughout his career.

Follow us on our social media channels to get live updates about the project and see specimens from the collection.

We’re trying to improve our website and would love to hear your feedback. Please complete this short survey.