The University has been involved in extensive studies of the Moroccan flora since 2000 and more recently the flora of Libya and Egypt. The Moroccan collections were part of a Darwin Initiative project that resulted in the Checklist Flora or Morocco.

Morocco with its privileged geographical position, unique mountain conditions and verycharacteristic climates has resulted in it having an attractive and fascinating flora. The richness and diversity of the flora show the 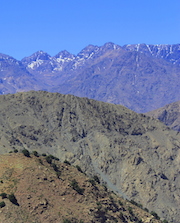 country to be a veritable reservoir of biodiversity situated at floristic crossroads. Sauvage (1994) has indicated that Morocco is one of those western Mediterranean countries where the flora is the most rich and the most varied and that this richness is easily explained by the variety of Mediterranean climates from the Sahara to the moist, the wriest range Iran in the East. Sauvage noted that an explanation was also the general location of Morocco with two lengthy seacoasts, one open along all its length (c. 2800 km) to the influence of the Atlantic ocean, the other to the Mediterranean influence.

The high summits (several of which pass 4000 m) of the Middle and High Atlas over give rise to the high mountain vegetation types. There are 4979 accepted taxa in the Moroccan flora, of these 1282 are recognised as subspecies. This significant number of vascular plants gives Morocco a privileged position amongst the countries bordering the Mediterranean Sea, coming after Turkey, Italy, Greece and Spain.

There are nine important families with over 100 species containing almost 60% of the flora. These families are in order of importance:

The others families also important, but with only 50-60 species are: The Boraginaceae, Chenopodiaceae, 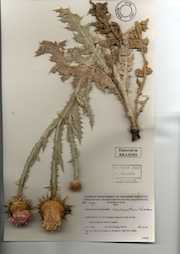 The genus Silene is by far the richest in the Moroccan flora with 69 species, followed by the genera Centaurea, Ononis, Teucrium, Euphorbia, Trifolium and Linaria where the number of species varies between 40 and 50, then the genera Orobanche, Juncus, Helianthemum, Erodium, Ranunculus, Lotus, Vicia and Carex each containing 30 to 35 species.

To this native flora can be added a multitude of exotic species introduced for economic ends as Pinus species, Ornamentals as Hibiscus species, as well as several adventives and ruderals. It is important to note in this Saharian provinces are still underexplored. Further methodical exploration will reveal many novelties.