What is data assimilation?

“Data assimilation is often thought of as a way of keeping a model ‘on the tracks’ by constantly correcting it with fresh observations.”

What is data assimilation?

Data assimilation is the science of combining different sources of information to estimate possible states of a system as it evolves in time.  Often only one state is estimated at a time, e.g. the most likely state, or the mean state. We call this state an analysis.  More generally data assimilation can determine an evolving probability density function, which specifies the range of possible states and the probabilities that they represent reality.

The information used comes from observations and a numerical model.  Data assimilation can be applied to any classical system, but our focus is on geophysical systems like the Earth’s atmosphere, ocean, and land surface.  Data assimilation has many names, depending on the field of application (e.g. state estimation, history matching, filtering, smoothing), and it is often combined with so-called inverse methods to extract maximum information from observations.

Why not simply use observations to estimate a system’s state?

In most situations, observations are sparse and are not made on a grid.  All observations are imperfect versions of reality, and so will be in error.  Furthermore some observations provide only indirect information, e.g. they may be made at different times to the required analysis and may measure different variables (e.g. photon counts instead of geophysical variables).

Why not simply use models?

A free running model (that is without the influence from new observations) will drift from reality.  This is due to modelling approximations, unknown processes acting, and uncertain initial conditions.  These errors may not be a problem for some applications (e.g. in many climate studies if the model has a good average state), but they are a source of inaccuracy in applications like weather forecasting.  For such problems, models on their own are unable to make realistic state estimates indefinitely through prediction, although they are still very useful.

Data assimilation combines observations and models in a way that accounts for the uncertainties in each, while simultaneously respecting certain constraints.  These include the laws of motion of the system through the model equations, and how the measurements physically relate to the system’s variables.  In weather forecasting, recent weather observations are combined with today’s model forecast to obtain a complete picture of the atmosphere now in order to start a new forecast for the days ahead.  Data assimilation is often thought of as a way of keeping a model ‘on the tracks’ by constantly correcting it with fresh observations. 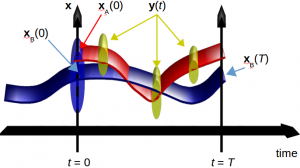 In DARC we are using and developing a range of advanced methods that try to solve this problem in ways that are as rigorous and applicable as possible.  Most methods that we use fall into a category (variational methods, ensemble methods, or particle methods) although we are also using and developing hybrids of these.  We apply data assimilation to many areas of the geosciences, including meteorology, atmospheric chemistry, oceanography, land surface physics, coastal sediment transport, and space.

Find out more about data assimilation

Data assimilation at the Met Office

Data assimilation at the ECMWF