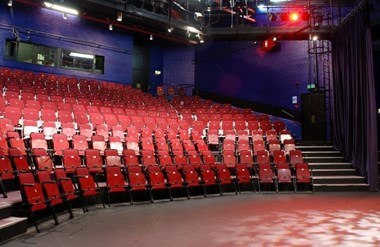 by Kathyrn White, University of Ulster

During the summer of 2015, Ulster University’s School of English and History, in partnership with Riverside Theatre, devised Bann Beckett, an innovative project for both the university and for the general public. This initiative, its name inspired by the river Bann, beside which the Coleraine Campus is located, is designed to assist learning and teaching at Ulster and also bring together ‘Gown and Town’ in shared appreciation of the work of Samuel Beckett. Events including workshops, pre-show talks and three separate productions of Beckett’s work took place between November 2015 and February 2016.

Students studying English at Ulster University are introduced to Beckett in their first year, with Waiting for Godot functioning as one of their formative texts. In addition, they have the opportunity to study Beckett in second and third year as well as at postgraduate level. Therefore, it was fitting that Bann Beckett launched with London Classic Theatre’s production of Waiting for Godot. A workshop led by the actors took place prior to the main performance, which gave students the opportunity to ask questions about the production. They probed the actors, endeavouring to garner elucidation about the ‘meaning’ of Beckett’s seminal work. The actors’ generosity of spirit and their willingness to interact with the students facilitated deeper engagement with the play, enabling ‘learner-centred’ teaching and an appreciation of the medium of theatre. Reflecting on the importance of the Godot production and workshop, Dr Frank Ferguson, module co-ordinator for the first year compulsory module on which the play features, commented:

In the first instance, having Godot in the university theatre was marvellous in itself as students could then get the full experience of the play as a performance and reflect upon the requirements of staging and adaptation rather than merely reading and discussing a “flat” text. In addition, the workshop proved to be a very exciting and rewarding occasion for the students as they were able to ask questions which were directly relevant to their course and it was obvious how much they gained from the experience. The actors were very generous with their time and provided fascinating insights into their various roles and approaches to the play. This event was extremely beneficial to developing students’ concepts of the requirements of drama and Beckett’s work in particular, and indeed very inspiring to me as a teacher as it helped challenge the belief in some that Godot was a “difficult” play. The success of the event was demonstrated in a number of ways: it permitted students to gain a means to comprehend Beckett as an accessible and indeed comedic playwright; it gave many their first experience of serious, live theatre; it was reflected in enhanced capability to perform in coursework and examinations; and it inspired many students to develop their interest in drama and follow this up in module pathways over the coming terms and years.

Following Godot, in February 2016, Gare St Lazare Ireland presented Molloy. Conor Lovett’s ability to perfectly capture the Beckettian voice and convey the pathos, along with the humour, found in Beckett’s writing, undoubtedly impacts the audience. In a Q&A session following the performance, one woman commented that although she had been reading Beckett for a number of years, and had seen many productions of his work, during Lovett’s performance she felt she had truly understood Beckett. The significance of a statement like this is not to be underestimated and it highlights the fundamental importance of continuing to stage Beckett. Prior to Lovett’s performance, Professor David Pattie (University of Chester) delivered a talk on Beckett’s life and the influences on his work, focusing on the importance of the voice in the writing. The inaugural Bann Beckett ended with Declan McGauran’s intriguing performance in ‘Beginning to End’, which was complemented by a comprehensive pre-show talk by Dr Nick Johnson (Trinity College Dublin), on the genesis of the production. Recordings were made of both pre-show talks and these have been, and will continue to be, utilised in lectures and seminars.

The Bann Beckett project aims to make Beckett’s writing more accessible to students and the public alike. Inevitably, those of us involved in education think about the pedagogical approaches of teaching Beckett’s work but we should not overestimate the fundamental importance of affording students the opportunity of seeing Beckett’s works performed. Working directly with Jeremy Lewis, the Riverside Theatre Manager, enabled a collaboration which had a measurable impact on students studying Beckett’s work and the general public. Jeremy writes:

Feedback from those both who took part in, and who attended as audience members, show Bann Beckett was everything I had hoped for as theatre manager. It was an entirely new development for the Riverside – we’ve had nothing like it in the theatre’s forty-year history – and audience numbers were most satisfactory. I was particularly pleased that a large group of UU undergraduates met the cast of one of the plays and their encounter is audio-recorded on Riverside’s website. In the final analysis, the plays, the lectures, the group sessions and workshops proved to be highly enjoyable and of immense benefit to the continuing research surrounding Ireland’s greatest playwright.

Bann Beckett looks forward to continued collaboration with individuals and institutions in the celebration of the work of Samuel Beckett.