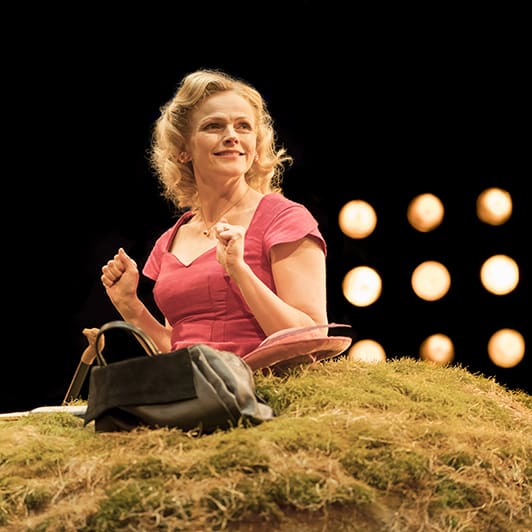 Nearly fifty years after a Beckett play was last on the billing of Manchester’s Royal Exchange theatre, this summer Maxine Peake and David Crellin took to the stage to perform Winnie and Willie, Beckett’s best loved duo (rivalled only by Mr and Mrs Rooney from All That Fall, perhaps).[1]This 2018 production of Happy Days was directed by Sarah Frankcom, with set design by Naomi Dawson, and lighting by James Knowles.

Beckett wrote Happy Days in English during the autumn and winter of 1960 and 1961. It was first performed at the Cherry Lane Theatre in New York with Ruth White as Winnie. It made its UK premiere at London’s Royal Court theatre in November 1962, directed by George Devine and assisted by Beckett. For this production Brenda Bruce, speaking in her natural Scottish accent, played Winnie. In 1974, Dame Peggy Ashcroft played the starring role, directed by Peter Hall. Finally, Beckett came to London again to revive Happy Days at the Royal Court with his favourite actor, Billie Whitelaw. In these early performances, where Beckett’s influence was still palpable, getting the rhythm right was imperative.[2]James Knowlson notes Bruce’s recollection of how Beckett ‘even brought a metronome into the theatre and set it down on the floor saying, “This is the rhythm I want.” To the actress’s astonishment, he then left it ticking relentlessly away.’ (Knowlson, 1996, 447) As so often talked about by practitioners, when performing a Beckett play, rhythm is key. In Frankcom’s production, Peake’s ceaseless sputtering in her slightly northern RP dialect, Crellin’s lowly interjections, and a slowly rotating mound (more on this later), all contributed to a polyrhythmic sense of time and space that represents the fragmentariness of Beckett’s text.

Peake’s return to the Royal Exchange after her critically acclaimed performance of Hamlet in 2014 (where she was directed by Frankcom), was greatly anticipated and as Winnie she didn’t disappoint. Peake’s portrayal of a frivolous scatterbrain whose grip on reality is faltering was spot on. Her nervous, quivering voice, shallow yet determined laugh, and fastidious habit of removing strands of dry grass from whatever miscellaneous object she pulled out of her bag all helped to create an unforgettable portrayal of Winnie. As Beckett said, Winnie has ‘a profound frivolity. She’s scatterbrained, she babbles.’ (Knowlson, 1986, 16) Peake’s ‘scatterbrained’ Winnie dabbled in fraying allusions to Dante, Shakespeare, Herrick, Milton, Keats, Gray, and Yeats for two hours and twenty minutes! As time goes on, Winnie loses her already limited mobility, memory, and language. As her recollections falter, the lines she quotes appear in incorrect, half-remembered fragments. In the second act, her failings become so apparent that she repeatedly asks: ‘What are those immortal lines?’ Winnie’s desperate rummaging in her handbag for essentially a series of props – toothpaste, toothbrush, hat, mirror, lipstick, comb, nail file, music box, revolver, etc. – are carefully choreographed movements that not only refer, in a metatheatrical sense, to the creation of a theatrical world with as little as possible, but also correlate with Winnie’s speech patterns. Whilst the chiaroscuro effect that is employed so consistently throughout Krapp’s Last Tapeis replaced by the bright ‘Heavenly sky’, there are still powerful opposing dynamics at play. For instance, the piecemeal and transitory nature of this material clutter works in tandem with off-beat speech rhythms and disordered phrases, Winnie’s imploring chatter works against Willie’s irritated silence, and humour is torqued with sadness. For Winnie, the pleasures of repetition, reassurance of habit, and company of her objects are offset by her loss of control (the parasol bursts into flame and she throws away her mirror) and mobility, as well as her dwindling optimism. Peake stressed this through her glowing smile that would tremble and turn into a silent whimper, exposing a rare yet powerful moment of silence in the performance. This fragmentariness and sense of wasting away was also alluded to on set as Dawson’s conical mound was edged with detritus, hinting at Damien Hurst’s short film for Beckett’s dramaticule, Breath (2000).

Whilst a performance of Happy Days in the round is certainly unorthodox and can unnecessarily complicate the seen/unseen dynamic between Winnie and Willie (note Winnie’s glasses and magnifying glass to aid her long-sightedness), elements of this set were certainly thought provoking.[3]In Frankcom’s production, Winnie’s mound was surrounded by water, which, as it seeped across the black floor, appeared glassy and reflected the mechanics of the theatre. This made Winnie and Willie, who for the first act was wedged in a small cubby at the side of the mound that encases Winnie (an amplification of her Giacometti-like body), seem surrounded by a moat.[4]As a result, the audience was distanced from Winnie, who was not only unable to move but also stranded, separated from the spectators by an invisible impasse. This effect, however, was nullified by Willie’s emergence through the stage doors in act two. As Willie walked through the doors and around the circumference of the set, the tension dissolved – what a shame! The set’s effectiveness was in its simultaneous ability to move Winnie and Willie whilst constricting them. Throughout the play, Winnie rotated concentrically like a life-sized music box that was being wound up, allowed to sing only at the end of the play in order to ensure that the atmosphere remained, as Beckett said to Alan Schneider, ‘poised on a razor-edge and no breathers anywhere.’ (Beckett, 2014, 421-2) Whilst creating tension, this motion echoed the character’s preoccupation with routines, the text’s circling pattern, and the sense of endlessness to both Winnie and Willie’s existence. Before both acts, warped circus music (correlating with the carousel-like mound and foreshadowing the duet from The Merry Widow that Winnie sings at the end of the play) is interrupted by a shrill alarm bell, marking the beginning of the Peake’s performance and Winnie’s day whilst nodding to the clockwork rhythm Beckett’s play demands.[5]

During the second act, Winnie, now up to her neck in mud, continues to rotate. To allow the audience to see her facial expressions, Peake was simultaneously filmed and shown on screens that hovered about two metres above her head. As these video screens provide visual echoes, they recall the sense of repetition throughout Beckett’s oeuvre. They also reference Beckett’s intermediality and created a sense of alienation through their meta-theatricality. Ultimately, the spectator is made aware of the ‘changelessness’ of Winnie’s situation. Throughout this act, Winnie’s failing memory and ageing body is physically embodied in Peake’s performance anddigitally displaced by the video screens. This creates a new tension where embodied and abstracted performances share the same space. Whilst the tension between Winnie and Willie – which reaches its climatic moment when their eyes meet after Winnie has sung the final line of her song, ‘You love me so!’ and smiles – may have been lost, in Frankcom’s production, questions of liveness and intermediality have emerged.

[1]The performance alluded to is Waiting for Godot, directed by Braham Murray with Max Wall as Vladimir and Trevor Peacock as Estragon. It was performed at the Royal Exchange in the November and December of 1980.

[2]During this time performances were also staged in France and Germany. A full production history can be found via the Staging Beckett database.

[3]Anna McMullan suggests that Happy Days ‘draws attention to the limits of the visible, what is hidden, withheld, unseeable, or unreadable from the audience’s perspective.’ (McMullan, 2010, 1)

[5]Billie Whitelaw confessed that at a certain point when playing Winnie ‘she could no longer endure the strain of Sam’s obsession with the pronunciation, tone and emphasis of each syllable of every word in the long text.’ (Knowlson, 1996, 658)