Sarah Jane Scaife sets her doubly-billed productions of Rough for Theatre I and Act Without Words II in a disused yard adjacent to the Ulster Bank offices on the banks of Dubin’s Liffey river. Her Company SJ and Dublin theatre company Barabbas are dedicated to re-inserting the writings of Beckett into the architecture and social spaces of Dublin city. As Scaife puts it in the programme notes, they invite audience members to note the surrounding combination of social decay and financial power as they walk to, and enter, the performance space.

Lianne O’Shea’s subtle lighting illuminated areas around the perimeter of the space which initially people were free to investigate: candles circle a quote from Waiting for Godot, written in chalk (‘they give birth astride of a grave’), a fire burns in a small metal bin. When the first performance, Rough for Theatre I, begins, chairs are carried to a semi-circle in one area of the yard, lit by footlights. Under a butterfly tree, its blooms beginning to decay as the autumn cold sets in, A (Trevor Knight) scratches his bow across a battered violin, the sound as uncomfortable to the ear as the biting cold is to the gathered bodies. Scaife’s Rough reveals relationality in extremes, one human reaching toward another in a gesture marred by cruelty and domination. It is not clear what Raymond Keane’s B wants from A: company or servitude?

During the break between the shorts, staff hand us a cup of cocoa, but it does little against what is becoming a very committed Dublin wind. We’re grateful however, and for the fact that no rain is falling. As we turn, shivering to the next performance, dirt and cold become central to this theatrical experience. A and B in Act Without Words II are huddled in sleeping bags on cardboard under the only shelter in the yard – a corrugated iron awning. The more fastidious B’s (Brian Burroughs) response to the dirt around him as he performs the routing of getting up, exercised, dressed and moving his and A’s sack on a few feet, make us even more aware of the precariousness of this existence, as does A’s (Raymond Keane) palsied gestures as he goes through his version of the ‘routine’. A’s movements are painfully slow, as if control over his body is waning and made all the more painful by the biting cold. The dramas, combined with the weather and the darkness, demand that the audience give thought to the difficulties of survival under such conditions.

The performances are a testament to the actors’ skills, retaining physical control and precision throughout the performance – challenging even without the cold. Scaife’s approach focuses on the poverty and deprivation that these texts evoke: Beckett’s use of the vagrant as a reflection upon normative society. Scaife’s siting of the plays expands the resonance to a consideration of the material conditions of poverty and the structural conditions which permit or create it, as well as the spiritual and existential poverty that comes with being, as Heidegger’s Dasein, thrown in the world. In taking Beckett back to the concrete – literally and figuratively – Scaife allows both of these resonances to co-exist. 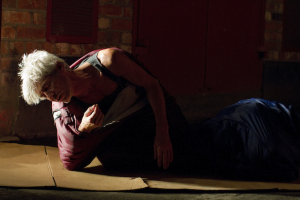