Whether it is to do with the anniversary of Waiting for Godot, or helped by the creation of the Happy Days Festival in Enniskillen, it seems that there was much Beckett in the air in 2013 – especially among some of Ireland’s foremost smaller, independent theatre companies. Pan Pan, who have recently presented Embers and All that Fall, is a good example (a link to this company’s website with images from Embers, can be found here). The Blue Raincoat theatre company, whose production of Endgame is reviewed on this blog here, is another. However there are companies who have been working on Beckett for quite some time who have presented work recently also: Gare St. Lazare Players Ireland, for example. Their production of Waiting for Godot ran in Dublin, Belfast, and Boston in October and November. Reviews of their successful international tour can be found in the following: Broadway World, Boston Globe, Edge Boston and Emertainment Monthly. Conor Lovett brought a remarkable vulnerability to his subtle Vladimir, set against a visually arresting lunar landscape.

This is the second time that the company have worked on this play. However their first production came much earlier in their careers. While in the interim years artistic director Judy Hegarty-Lovett and the Lecoq trained Lovett have established themselves as among the finest interpreters of Beckett’s prose works, they have turned (or returned) now to this dramatic work.

The Beckett related work that companies like Gare St. Lazare, Blue Raincoat, Pan Pan and Company SJ are currently engaging in is a clear indication of the energy that the drama still brings to the Irish theatre scene and more widely. While all these companies began life or came to notice in the 1990s and all share some connection to Ireland, Blue Raincoat and Pan Pan have only recently begun to work on Beckett’s drama. The former presented their very successful Endgame this year (2013) and the latter presented their production of the radio play Embers this year also, and All that Fall in 2012. While the fact that such innovative companies have turned to Beckett recently is notable in itself, it is also interesting to see the kind of work in which companies who have had a longer relationship with the author, like Company SJ (with Barabbas) and Gare St. Lazare, are engaging. Company SJ’s site specific production is reviewed here. It is exciting to see what new and innovative routes they are taking into the work, as well as what new perspectives on the drama are emerging because of the work of all of these companies. This is one of the key questions that the Staging Beckett Project is asking our interviewees, which include members of the above companies: just what is it that keeps these artists coming back to or going towards Beckett? 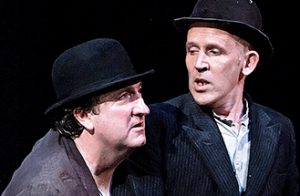 Gary Lydon (left) as Estragon and Conor Lovett (right) as Vladimir in the Gare St Lazare production. The cast also included Taig Murphy in the role of Lucky and Gavin O’Herlihy as Pozzo, seen below on the ghostly lunar set.