Lydia and Katie interviewed parents and adolescents who took part in our BRAVE trial for the MSc projects. We are excited to share some of their findings.

Anxiety disorders are some of the most common mental health problems experienced in adolescence. Adolescents with anxiety differ in their clinical characteristics compared to children (Waite & Creswell, 2014), however, psychological treatments (most commonly CBT) are often delivered to children and adolescents across large age ranges. Although CBT has been demonstrated to be effective, a significant proportion of young people continue to remain symptomatic at the end of treatment. In addition, there is (albeit mixed) evidence that adolescents may have poorer treatment outcomes than children (e.g., Ginsburg et al., 2011).

Recently, treatments have been developed specifically for adolescents with anxiety disorders. BRAVE-Online for Teenagers was developed in Australia (Spence et al., 2011), and has been shown to be effective.This treatment approach is currently under evaluation with adolescents referred for treatment to child and adolescent mental health services (CAMHS). Itis delivered over the internet with therapist support and involves psychoeducation andcognitive components, as well as exposure. Although it is assumed that all these components influence outcome, there has been little investigation of the relative impact of different treatment components. Similarly, it is unclear whether other components of treatment (e.g. mode of delivery, therapist involvement, additional parent sessions) are acceptable to both adolescents and their parents.

In general, patients’ perspectives have received limited attention in psychological therapy research, particularly those of young people and their parents. Hence further exploration of what adolescents and their parents think about treatment and what they find helpful or unhelpful, in relation to specific components of treatment, is warranted.

In the current study, 13 adolescents (aged 14-19 years), who had participated in the BRAVE treatment trial, and 13 parents (6 of whom had also received parent sessions undertook a semi-structured interview after completing their 6-month follow-up assessment. Questions were open-ended, based upon a topic guide and designed to invite participants to discuss, and then reflect upon, their experiences of treatment. Interviews were all audio recorded, transcribed in full, and analysed using thematic analysis.

This research aimed to understand parent and adolescent experiences, so that treatments and be improved and tailored for patients in the future.

Four main themes emerged from both the parent and adolescent interviews.

Lydia’s findings/themes from her interviews with parents:

Acceptability of BRAVE – This involved parents perception on what components of BRAVE adolescents struggled with or found difficult. For example, when asked about the BRAVE ladder (a graded exposure technique), it emerged that parents thought adolescents tended to find the BRAVE ladder difficult without the continued support of a therapist.

This theme also involved the parents’ acceptability of certain components of BRAVE in their own sessions. For example, parents who completed sessions found the psycho-education aspect of the program incredibly useful. For example, learning about parental behaviours that can maintain teenagers’ anxiety.

Observations since completing BRAVE – This theme looked at observations for improving the BRAVE program for the future. For example, having more formal internet interaction with the therapist e.g. Skype chats. It also looked at life since BRAVE for both the parents and the adolescents. Many of the parents believe that their teenager has come a long way since BRAVE and that they have a new found sense of confidence. This is similar for the parents, who thought that since completing parent sessions they also felt more confident dealing with their teenagers’ anxiety, and have greater understanding about their teenagers thoughts and feelings.

Value of the Therapist – Parents felt happy that they still had contact with the therapist. They didn’t feel as abandoned as they thought they might when they had initially discovered it was going to be an online treatment program. They felt supported and confident that there was somebody for their child and/or themselves to talk to. However, to a certain degree, parents felt as though they would have wanted more therapist contact, either online (e.g. Skype chats) or more face-to-face sessions.

Parent involvement with BRAVE – This was a very important theme. Previous findings suggest that parent involvement does not improve treatment outcome for the adolescent (when compared to treatment without parent involvement). However, it is important to discover whether treatment outcome was perceived as more positive by adolescents and parents, and if parents felt more accepting of the programme if they were directly involved. If outcome is perceived as more positive, and if parents are more accepting, it is likely that teenagers will stay in the program. Parents did feel that their involvement was necessary and described the program as a learning process. Although some parents felt it could sometimes be inconvenient completing parent sessions whilst working, they still found it worthwhile. Parents who did not complete the parent sessions did not feel as involved, and were perhaps less accepting of the program as a whole.

Katy’s findings/themes from her interviews with adolescents:

Perspectives on the design of BRAVE: Several sub-themes arose from this theme, including experiences of completing an online treatment program. A positive aspect of this was that adolescents really liked that they could email a therapist and also receive feedback and reminder messages from them. A few also discussed that this made it easier for them overall because they didn’t have to travel into the clinic. Conversely, some adolescents felt as though they didn’t engage as well when they were trying to learn something online, and thought that they would have “taken more in” talking face-to-face with someone.

Perceived value of specific CBT techniques: Throughout BRAVE, a number of different important techniques are used. It is interesting to hear how certain techniques are valued by participants. For example, the idea of using rewards created several divided opinions across the adolescents. Some felt that the thought of receiving something was a big motivator to get them through a difficult week, but others felt it was “a bit young” for them and getting over anxiety itself was a big enough reward.

Outcomes of BRAVE:  Participants talked about feeling as though they were not alone, and that they had gained a better understanding of their anxiety through using the program. Several adolescents also discussed finding it a lot easier to talk to other people in their family about their difficulties and that this was very beneficial. Some spoke about feeling as though the skills they had learnt from the program had begun to fade away over time; this is really important information to have with regards to improving aspects of BRAVE.

Reflections on potential improvements to BRAVE: Adolescents came up with a number of ideas that they felt would have improved the program. For example, several thought that optional modules on topics such as sleep hygiene and school anxiety should have been included. Additionally, those who were unsure about their engagement in an online program also discussed the idea of using Skype chats to speak to their therapist. They thought this could begin to bridge the gap between online and face-to-face treatments. 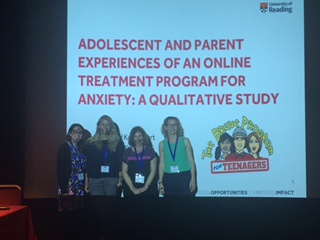