Suzannah presented a fantastic poster at the BABCP conference on her work with adapting a social worries questionnaire for a younger age group. Please read her summary of the poster below. 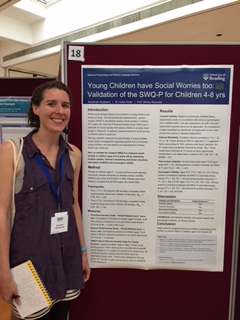 Young children are often described as being shy or quiet around others, but these are informal terms that don’t capture young children’s social worries that go can as far as affecting their daily life. In comparison to middle childhood, relatively little is known about the whether social anxiety changes or stays the same over early childhood. The study the poster described is an initial validation of an adapted version of the Social Worries Questionnaire – parent version (SWQ-P; Spence, 1995).

We called the questionnaire the Social Worries Anxiety Index for young children (SWAIY). The SQW-P was originally developed for parents to report on 8-17 year olds. For this study it was adapted for use in relation to children aged 4 to 8 years old.

In order to validate a questionnaire there are several steps: first, the process through which the items were developed is scrutinized; second, whether the questionnaire is really measuring social worries is examined. This is done by looking at how reliably all the questions measure the same thing, and whether answers on the questionnaire from two different time points look similar. Finally the scores on the questionnaire were compared to already validated measures of anxiety in children aged 4 to 8 years old.

Parents of 174 children from across Berkshire aged 4 to 8 years (average age = 5.84 years) completed the SWAIY once and then two weeks later. 109 of these parents completed the questionnaire for a second time.