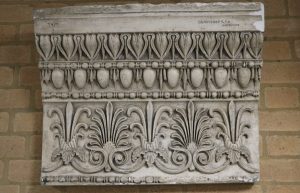 The Erechtheion was one of several Greek temples on the Akropolis (literally ‘high city’) of ancient Athens, just North of the Parthenon. It was built between 421 and 406 BC, as part of the rebuilding of the Akropolis, after the Persians sacked the city in 490 BC. This cast is of a piece of epicranitis, the top border of the outside wall of the temple, which went around the entire building. It is decorated with a repeating pattern of lotus and palmettes. Lotus flowers and palm trees were exotic and foreign to the Greeks and would remind them of the East. Using such decorations on their monuments showed their knowledge of and interaction with Egypt and the Middle East. The fragment of the frieze on which this is based in currently displayed in the British Museum room G19 (inv. no. 1816,0610.254). This cast and nos. 2, 3 and 14 were owned and used by Reading’s School of Art. There students were expected to learn from the old masters by copying casts of classical Greek or Roman artefacts. This approach fell out of fashion in the mid-1900s so many such casts were placed in storage or even thrown away. Luckily casts 1–3 & 14 were rehomed in the School of Humanities.