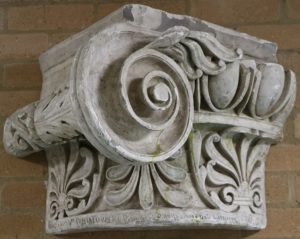 This cast is of a capital that crowned a column of the Ionic order or style. The band of lotus and palmettes—as found on the Erechtheion frieze [1]—sits below a repeating pattern of eggs and darts on one side and fig leaves and vines on the other. These suggest fertility, wealth and success: figs and eggs are traditional banquet foods of the ancient (and modern) Greeks. Similar column capitals were found on the Athenian Akropolis, from both the Erechtheion and the later Temple of Rome and Augustus. The inscription on the lower left side of the cast reads ‘Rome’, which might refer to the latter temple. The inscription preceding ‘Rome’, however, reads ‘Poniatowski Va’, which refers to the Villa Poniatowski, a large house in the Borghese Gardens, now part of the Villa Giulia Museum in Rome. We know the original capital was displayed in the Villa from 1842 or earlier because of a watercolour by Alfred Engelbach in that year entitled ‘Ionic Capital, Villa Poniatowski, Rome’. The capital from which this cast was made is still in the Borghese Gardens.