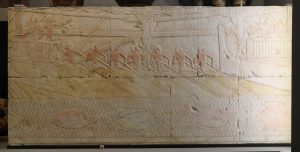 Another one of the Palmer casts [see also 9]  from a relief in the Hatshepsut mortuary chamber shows an Egyptian ship travelling on the Nile to perform a trade deal with Ethiopia. The rowers are likely slaves or poor mercenaries (people who are paid to fight). The richer members of the party sit at either end of the ship. The man standing in front of the soldiers is an Egyptian commander under Hatshepsut’s orders. Her conquest in Ethiopia became stuff of legend. The image shows that the voyage was successful, as they bring wheat, wood, art and (at the left) a chest, probably full of gemstones or other natural minerals.