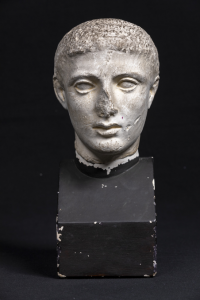 This head is a cast that represents a Lapith— man from Thessaly, Greece—engaged in a mythical battle with Centaurs at the marriage-feast of Peirithoos, king of the Lapiths. The original head on which this cast is based—now in the Acropolis Museum (object number 699)— fell off one of the metopes that decorated the Parthenon. The square element or metope to which this head belonged, South metope VI, is now in the British Museum, along with other metopes and decorations that Lord Elgin brought from the Akropolis to England from 1803.

The Lapith’s head fell off before Elgin arrived in Athens and was found in the Akropolis excavations by the Greek Archaeological Service, ca. 1920. Annie and Percy Ure were given this plaster cast by Semni Papaspyridi (shown right) of the National Archaeological Museum of Athens, September 1922, and Annie donated it to the Museum in 1967. This cast, which stands in the curatorial office of the Ure Museum (Edith Morley 39), has been captured through 3D digital technology to be placed in “Annie’s Box,” a new outreach activity provided through the generosity of the University Friends, launched in October 2019.