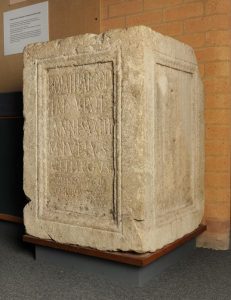 The inscription on this tombstone from Leptis Magna (in modern Libya) remembers ‘‘Domitia Rogata. She lived twenty-three years. M. Iulius Cethegus Phyllissam made this for his dearest wife” (translation by Peter Krushwitz). This indication of a lifespan rather than precise birth and death dates is normal for ancient monuments. The text at the top of the stone, which is far larger and better spaced than the text at the bottom, emphasises the Roman part of the text, the woman’s name, whereas the smaller text contains part of her husband’s African name —Phyllissam—and his Roman names—M. Iulus Cethegus—on the line above. Although African people were integrating into Roman culture and society as citizens, they kept something of their native heritage.

Between 1816 and 1817 the Bey of Tripoli, Libya, gave the Prince Regent (later George IV) ruins from Lepcis Magna. King George IV later gave them to his architect, Jeffry Wyatville, who used them to decorate the royal grounds at Virginia Water, Surrey from 1824-30. More than 130 years later, her Majesty, Queen Elizabeth II, gifted this tombstone to the University of Reading when she launched the Faculty of Letters and Social Science (now Edith Morley Building) in 1957.