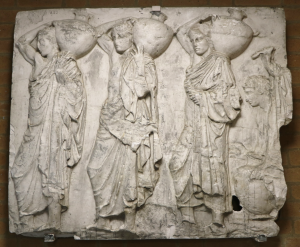 The Parthenon was a temple dedicated to Athena, the city goddess of Athens. The Athenian leader Perikles directed the sculptor Pheidias to oversee its construction and decoration between 447 and 438 BC. The Parthenon has a long and infamous history. A huge fire in the middle of the third century AD destroyed the roof and inside of the building. In the sixth century AD it became a Christian church, then from the 1460s a mosque under Ottoman rule. The Ottoman Turks stored gun powder in its opisthodomos (back room) and in 1687, when a Venetian bombshell hit, the resulting explosion destroyed some of the temple’s columns, so parts of the frieze that decorated the space above the columns fell, broke and were later removed or lost. This cast, which copies a section from the North side of the Parthenon (slab VI) is now in the Acropolis Museum (object number 864). On it we see three young men carrying hydriai (water jars) probably to a great feast in the city. This may be part of the Panatheniac Festival held in honour of Athena in June.

For more on how this cast arrived in the University, or on who Brucciani & Co. were, see the entry on the cast of part of the Erechtheion frieze (no. 1).

Click here for the next stop on the trail.