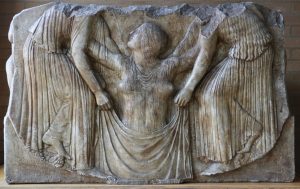 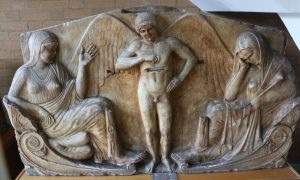 While the marble sculptures that these casts represent are somtimes called ‘thrones’ (of colossal gods?), they may have been altar fronts, tops of shrines, fences, stone chariots, or even re-carved sarcophagi or stone coffins. In the 1980s archaeologists found that the blocks of both thrones fit around a cultic pit inside of a classical Temple of Aphrodite near Locri, South Italy, but the sculptures were found in Rome in 1887 and 1894, on the grounds of the Villa Ludovisi. The Ludovisi Throne (left) shows a cultic or mythic scene, perhaps the sea birth of the Greek goddess Aphrodite or a cultic bathing ritual. The Boston Throne (right) seems to show the love god Eros monitoring a psychostasia (weighing of souls). The style of carving suggests the Ludovisi Throne was created c. 460 BC but the Boston Throne probably later. The Ludovisi Throne is now in Rome’s Palazzo Altemps and the Boston Throne in the Museum of Fine Arts in Boston.

These casts were in the possession of E.P. Warren in Lewes, Sussex. When he passed away in 1929, John D. Beazley, then Lincoln Professor of Classical Archaeology and Art at the University of Oxford, and executor to Warren’s estate, suggested to Percy Ure they be given to the Museum of Greek Archaeology (later renamed the Ure Museum of Greek Archaeology) at University of Reading to encourage the study of ancient art.