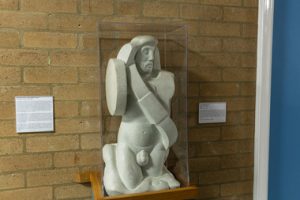 Protesilaus was a soldier in the Trojan War whose fate was foretold by an oracle warning him of the death that awaited him as soon as he stepped ashore at Troy. Stanford depicts Protesilaus in exactly that moment, with the waters of the sea swirling around his thighs, sealing his fate to be the first to die. Stanford avoids showing how the young soldier was killed—by an arrow—but rather focuses on how he felt moments before. The style of the work is geometric, building art from simple shapes, in contrast to the idealism and/or realism of classical style. The key shapes in this sculpture are Protesilaus’ shield and baldric (belt which held a dagger or sword), both of which clearly show that he is a warrior.