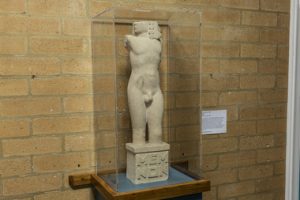 Memnon was the son of a goddess and a prince, and king of Ethiopia, in Africa. Like Protesilaus [5] he fought in the Trojan War, where he was killed by the famous hero Achilles. His mother pleaded to Zeus, ‘father’ of the gods, who granted him immortality. This statue is incomplete: he is missing both arms and half his head. In this way Stanford shows that Memnon’s story is mostly untold and incomplete. The unfinished appearance also recalls the surviving sculptures from antiquity, which are mostly broken. Stanford’s geometric, almost cubist style brings the ancient story into the modernist art movement.