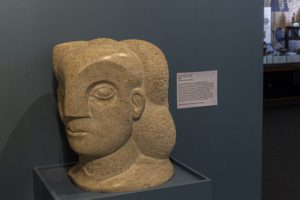 The myth of Helen of Troy has been told many times throughout history. She was the daughter of the Queen of Sparta and Zeus. Her marriage to King Menelaus of Sparta was disrupted by a visit from the prince of Troy, Paris, because he abducted Helen, or she ran away with him (sources disagree). This is what caused the Trojan War: the Greeks banded together to seek vengeance on the Trojans for Helen’s abduction. Helen was said to be the most beautiful woman the world had ever seen, so in representing her in a cubist style, which is harsh and rough, Stanford marks a real change from our traditional perception of her. Like Aphrodite, whose sculpture she sits alongside, Helen is a sexualised character. In choosing to show only her head Stanford removes some stereotypes and helps us to think about the story behind her character.