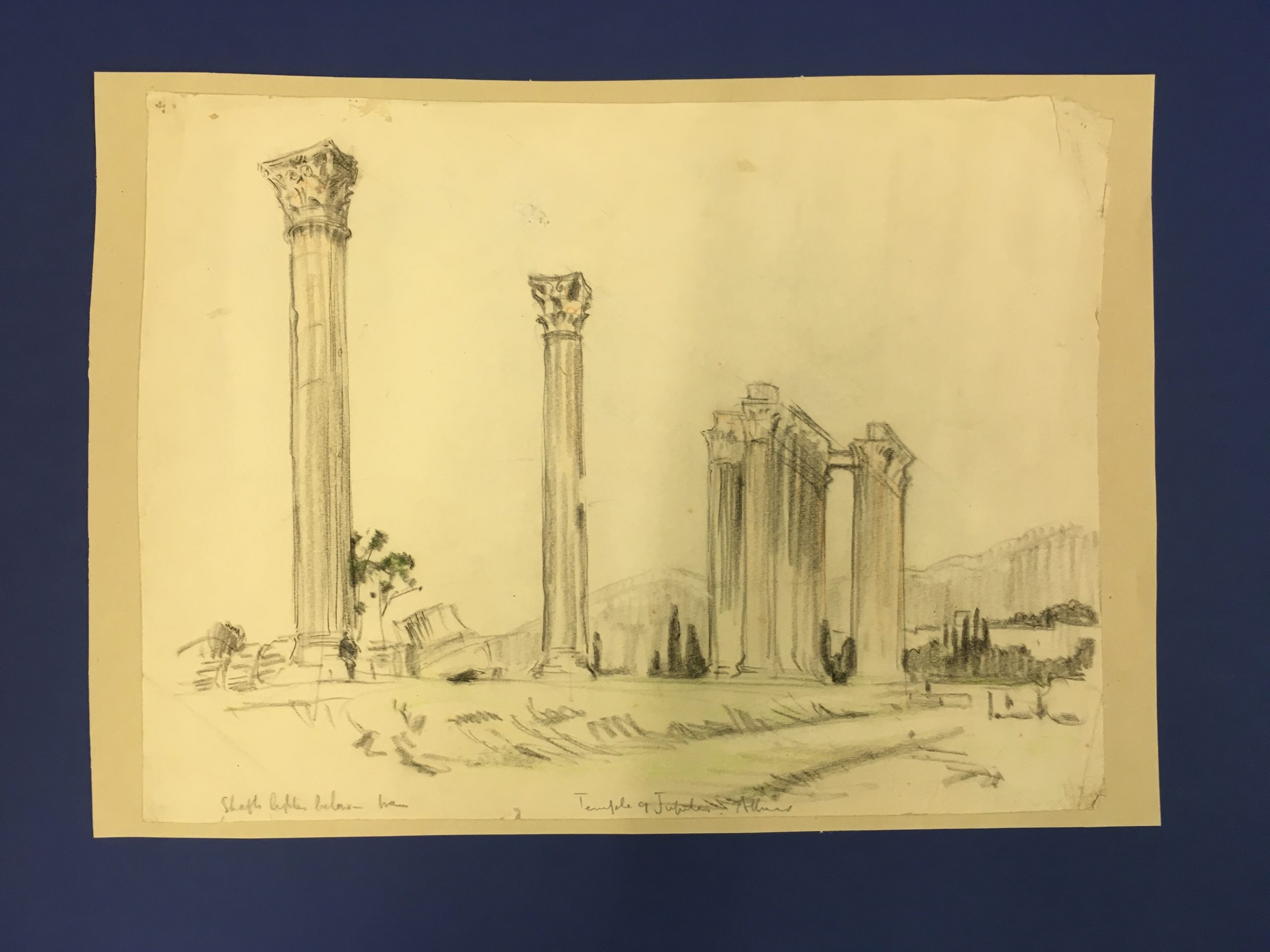 … A sacred dell,
Shut in with olive, vine and laurel,
Where throbs the nightingale.
Sophokles, Oedipus at Kolonos 16-18

One morning Leon was leaning against a pillar in the courtyard watching the swallows feed their young in the nests under the roof. Thalia appeared with a garland of roses and held up the flowers to Leon, inviting him to smell them. “It is Aphrodite’s day,” she said, “and I am going to lay a votive offering before her altar.”

“Ah!” remarked Leon, “I should like to see that statue again.”

“Well,” returned Thalia, “you can come now. It will mean I shall not need to have our slave Erinna take me. She never allows me to do anything fun.”

Leon nodded and she ran off with glee to the women’s quarter, returning almost immediately with her roses and a basket of fruit. “This,” she said, holding up the basket, “isn’t an offering. Mother says I need not hurry back and she thought we might be hungry. Ready Leon?”

They walked through the Agora, passed under the Akropolis, made for the unfinished temple of Zeus and, going through a gateway in the wall, found themselves in a park-like garden. In a retired corner, shaded by acacias was the shrine of Aphrodite. Within it was Alkamenes’ statue of her, one of the most beautiful in Athens, people said. She was represented with her hand to her hair, inserting a flower in her hair-band. The dainty movement of the wrists was much admired.

Thalia laid her garland on the steps of the shrine and the two knelt for a moment.

As Leon rose, the statue’s face caught his eye and he was suddenly reminded of Eugenia’s face, of her soft features and ringleted hair. The vision faded immediately, but as Leon stood there he knew now that her image had dwelt at the back of his mind ever since their parting.

He felt a gentle tug at his tunic and, returning to the present, asked Thalia what she wanted to do next.

“Shall we sit on that bank,” suggested the child, “and eat some fruit?”

Leon agreed and they took their seats under the almond trees, still robed in rosy pink blossom.

“Listen to the cicadas,” said Thalia, “this is the first time I have heard them this season. The warm weather has brought them out. How nice to be in the country.”

“We haven’t got very far into the country,” returned Leon. “But let’s play a game.”

“We’ll each count the animals and birds we notice, and the one who sees the most wins.”

“Flowers as well,” interjected Thalia, as she held up a poppy she had picked. “One”, she counted. “Two”, she added, pointing to a tree, “there’s a cicada”.

“You will certainly win at this rate,” laughed Leon. “Ah! queen wasp.”

“How do you know it’s a queen?” asked Thalia.

“Because the worker wasps aren’t born yet. Two to me,” pointing up to a nightingale which was singing in the tree. They could hear another answering in a nearby grove. “Look, there’s the first one’s mate on the ground. She’s got a leaf in her bill for building a nest. Keep still. She may come close. You can see the rusty red of her tail.”

The bird came near and to the child’s delight hopped right over her foot and then disappeared in the thicket.

“What’s that tapping?” Leon said, “That’s a woodpecker. Can you see him running up the tree like a mouse? Three to me.”

Thalia rose. “If we sit here, you’ll keep finding birds, and I shall lose. Let’s go to the little stream.”

Thalia laughed. “You are funny. Don’t you know frogs when you hear them? they’re mine. Three to me. We’re equal.”

“Frogs!” Leon stood in surprise for a moment, then burst out laughing.

“I don’t see anything to laugh at,” said Thalia, “although frogs certainly make an odd noise.”

“Now it makes sense,” returned Leon. “Your great poet, Aristophanes, wrote a comedy called the “Frogs”, and I could never understand, when I read it at home, how he could make a chorus out of frogs. The frogs in the west don’t make nearly as much noise as yours.”

“Aristophanes!” said Thalia. “I know him, for he often passes our house. He likes to stroll in the Agora and watch what’s going on. Our game can wait a little while I paddle in the stream.”

She removed her sandals. “Ouch! These stones hurt. But how nice and cool the water is. Look at the little fishes.”

Leon reclined while Thalia wriggled her feet until they were hidden in sand and shingle. Then she moved along the bank. There was a flash of blue. “What was that?” she exclaimed. “It came out of this hole in the bank.”

“A kingfisher. You can have it, as you saw it first.”

Thalia sat on the bank alongside Leon, wriggling her toes in the sunshine, then replaced her sandals and the two moved on.

Leon stopped before a little fir tree and pointed to a branch, its needles missing and covered with a cobweb-like sheath. “Inside that silken purse are some little caterpillars. A moth laid the eggs from which these creatures came. At home we call it the pine-branch moth. I will show you something very curious about these caterpillars.” He opened the cobwebby bag and took out several of the squirming creatures. Then, looking round, he found a wide-mouthed jar, its foot broken off. With Thalia’s help, he stuck it upright in the turf. He placed the caterpillars on the rim so that all faced in the same direction. “Watch”, he said.

The first caterpillar began to move and the others followed. Presently they reached the point from which they had started their journey, but, unheeding, went on and in a while had again encircled the rim.

“How funny!” exclaimed Thalia, “Surely they won’t be silly enough to go round a third time.”

But they did and Leon said they would traverse the same track for days until they dropped off.

“Let’s go and pick some flowers,” he said, “and return later.”

Before them the ground was golden with the asphodel, as it would be round the graves on the other side of the city, but Thalia knew better than to pick the “flower of death”. She soon tired of gathering flowers so they turned back to the pot. However, as they approached the urn, they saw two small birds busy on it. They flew away with the grubs in their beaks.

Later, they stopped to watch a hoopoe on a stone, its blotched crest ever opening and closing. They both saw the bird at the same time so it could not be added to either’s count, and Thalia said it didn’t matter as she had forgotten how many hers came to. They laughed at the bird’s cry, “op, op, op, op; op, op, op, oi”, and Leon said that Aristophanes had described the sound just like that in the “Birds”.

“I’ve heard about that play,” said Thalia, “from my uncle who was there. He said the chorus were dressed like birds with their arms made up like wings. It must have looked very funny. Now it must be time to go back to the inn.” 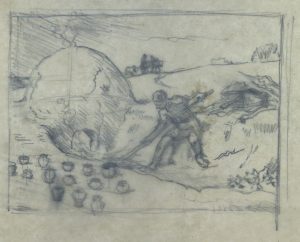