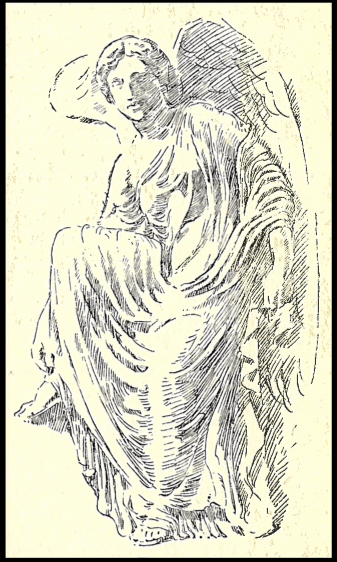 A few days after Leon had talked with Eumares the carver he found himself in the sculptor’s quarters. He took out his tablet on which the carver had written Kephisodotos’ name and address. He found the house without difficulty. The doorway was framed by two blocks carved to resemble figures supporting the lintel, on which was the relief of a sphinx with outstretched wings. On either side of the door was a crouching lion. They looked as if they had been rescued from some ancient palace. Indeed there was a deep saw cut in the flanks of one.

Leon knocked at the door and was admitted by an elderly female slave. She seemed much occupied with household tasks for she had a broom in her hand. Without speaking she indicated a curtained opening on the right and signalled him to enter.

As his footsteps rang on the marble flooring and his hand set apart the curtains Leon heard a woman’s voice. Stepping through, he glimpsed an arm disappearing behind a hanging at the far end of the room. The sculptor was busy at a small figure on a stand and hardly raised his head until Leon coughed. Then he started, and looked not at Leon, but at the model’s now empty chair.

Leon advanced and showed the message Eumares had written. The sculptor’s face lit up, “He’s a good craftsman and a good friend. So, our old servant admitted you without ceremony? She is deaf but faithful. Well, I hope my wife got away before you saw her. Times are difficult just now and I am too poor to afford models so my wife helps me out. I am at work as you see on an Aphrodite.”

Leon admired the little figure as the sculptor turned it round. It was graceful. Then his eyes wandered round the walls of the studio. Against them were ranged blocks of partly carved marble, casts, figures of clay and wax, and armatures – wood or wire supports. Leon noticed an object covered with a cloth on a nearby stand. “I was told you had finished a group of Artemis and her hounds.”

The sculptor walked across the room and removed the covering. There was the goddess running lightly with two hounds bounding by her side. In one hand Artemis carried her bow (made of wire and thread) and she had a quiver of arrows at her shoulder (little splints of wood). Although only in dull wax, the group had movement, lightness and grace. They far surpassed the figures Leon had seen in the temple of Artemis at home. Kephisodotos turned the group round, setting out his intentions, and seemed pleased with his visitor’s praise.

Leon, interested in acquiring a sculpture, asked about the cost of the group and of casting. Bronze of course, as silver was so expensive these days. The sculptor replied that he could get it done and done well at one of the bronze-casters. Then, moving away from the details of business, Kephisodotos began to talk about sculpture.

Did he like marble or working from bronze better asked Leon? Well, for some things Kephisodotos preferred bronze. One began with the soft clay and could go on making alterations and working up the detail, although with clay there was always more one could do. But the cast bronze could be worked upon too. Indeed there was much to be done that was necessary, mostly in the way of removing lumps and vent-hole marks.

It was fine though to work in marble, to start on a block and feel for the planes with which the figure had to be constructed. The old workers had an easy way, and he pointed to a statue his father had dug up in a garden, doubtless lost during the Persian sack of the city. The male figure stood stiffly upright, his hands clenched at his sides and one foot advanced before the other.

Kephisodotos showed clearly how the figure had been started. It was, in the beginning, a rectangular block. First the general outline of the front view was drawn with chalk upon the slab. Next the side contours were indicated, even the back view might be drawn. Then the worker proceeded to knock away all the material outside the contours. At that stage, a rough approximation to the required figure was already there.

Suddenly a child’s voice cried “Father” and a woman’s restraining tones were heard saying, “Not now my son, your father has a visitor.”

“I want to show father this.” There was a scurry of small feet and a child of less than four years tumbled through the hangings. He was a noble-looking boy with a mop of curly hair. He was wearing a short tunic.

He ignored Leon, but stood with solemn eyes before his father.

“Look”, he said, holding up his hand.

He had taken a fist-full of clay from the sculptor’s store, rolled it into a ball and had stuck in his finger to make holes for eyes and mouth.

“Mother”, he said as if asking for appreciation.

The sculptor smiled gravely. “I fear your mother will not feel flattered by your effort. You are a wilful boy coming here against her wish.”

Leon had crouched down on one knee so that his face was on a level with the child’s and he smiled, saying My name is Leon.” The child smiled back, then turned, looked again at Leon, and made a noise like a lion’s roar. He then laughed, waved his hand to the visitor and disappeared behind the hangings. 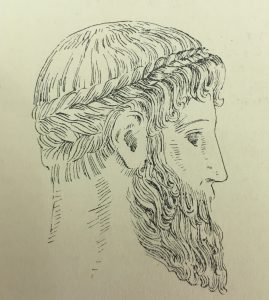