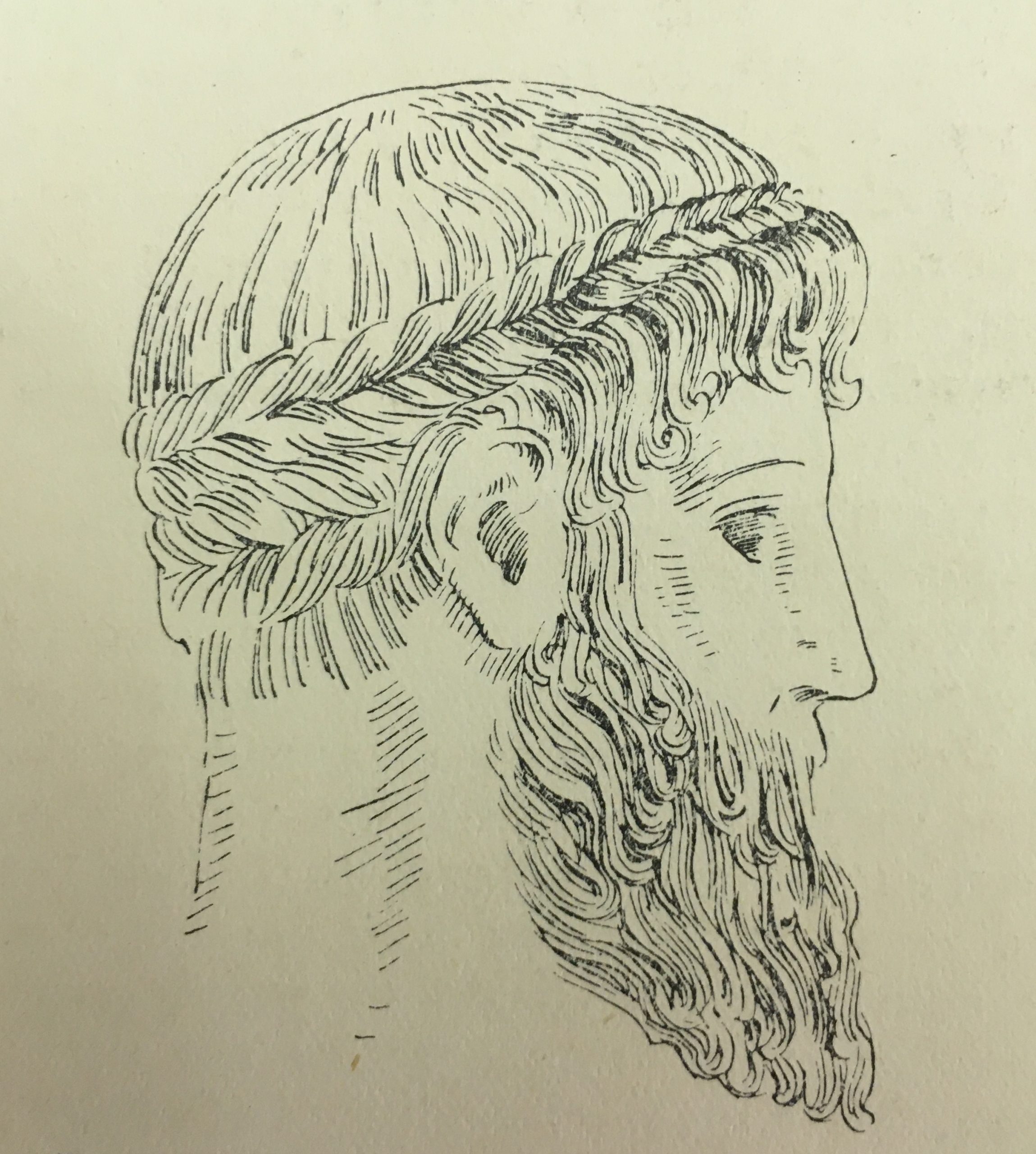 “I am a maiden of bronze” (Homeric Epigram 3)

Leon wanted to see how his statuette was getting on so he made his way past the temple of Hephaestus, patron of coppersmiths, to the metal-workers’ quarter. Hammering resounded on all sides. The fronts of the shops were open, the craftsmen busy at their benches or forges. On the walls hung basins, ewers, cauldrons, braziers and agricultural implements. In several shops metal furniture was displayed – bronze stools, couches, tripods for lamps and also objects for personal use such as wash cases and mirrors. Many of these were engraved on the back with scenes depicting Aphrodite.

Further on Leon passed a wheelwright’s shop where two leather-aproned men were using great tongs to fix a heated tyre onto the wheel of an ox-cart.

Leon found Molon the bronze-caster a few doors away. His shop was marked by a shield hanging inside the doorway. The shield was of early shape, much dented, and with a hole near the base.

Entering, he approached a burly man at his anvil. An apprentice stood by holding the work they were engaged upon with a large pair of pincers.

“Ah,” said Molon, for he was the burly man, “I see you have spotted our old-fashioned buckler. It hangs there because the man who carried it once worked here. He was proud it should hang where it does. That shield protected him at Marathon.”

“Marathon!” exclaimed Leon. “May it long hang there.”

“Yes, Philios fought on that field. He told me that the hole in the shield was made by a Persian arrow when the Greeks had nearly crossed that mile of ground which separated them from the Persians ranged near the sea. Philios said our men ran to keep their courage up and later, when the enemy’s arrows fell among them, they ran still faster. People have doubted the story of that mile run in heavy armour but Philios asserted that it was true. It was a well earned victory which Athens will never forget.”

“My tongue is running away with me but seeing you are a stranger I thought you might be interested. You came to see me on business, perhaps?”

Leon mentioned that he was the purchaser of the statuette of Artemis which Kephisodotos had sent.

“We have the matter in hand,” said Molon. “Perhaps you would like to see how far we have got.”

He led the way through the premises to the open where Leon saw a large mass covered with fire clay. It rested on a great earthenware pan and a man was busily engaged in piling firewood around.

Molon said, “It is unfortunate you have not called before to see the earlier stages of making the mould, before we covered up the statuette. Your group is inside that mould. The mould’s large size brings steadiness which is very important in casting. There must be no moving about inside. As you observe we are building a fire around which is sufficient to melt the wax. It will run down into the pan below. If you return in a few days you will be able to observe the next stage of the process.” Leon thanked him and left.

Being in the neighbourhood a week later Leon decided to visit the bronze foundry. As he made his way there he heard rapid steps behind him and turning, saw Molon hurrying after him.

“I had to go to the Akropolis,” panted the bronze-caster, “concerning some railings round one of the precincts. I am hastening my return as the metal for your statuette is heating in the crucible and I wish to be present when it is poured.”

At the works Leon saw a great crucible heating but no sign of the mould. His attention was directed to a hole in the ground covered by a board. Some loose ropes led from the cavity.

“The mould is upside down within the pit,” said Molon. “The wax ran out satisfactorily but unfortunately the metal is not quite ready.” He shouted to his men to make the fire hotter.

Leon stood by watching the fire mount and the embers glow white hot under the insistence of the bellows. After some time Molon declared the metal well molten and called for the double tongs. Two strong fellows appeared, carrying between them an enormous implement. With the jaws open they fitted the tongs round the mouth of the crucible, tightened their grip on the handles and took the receptacle off the fire. They stood one on either side of the hole in the ground, from which the protecting board had been removed.

Slowly the molten metal was run into the hole. With a terrific spluttering jets of hot air shot up and Leon took a step back. “That’s the air forced out of the ducts,” said the bronze-caster. “If the cast goes wrong it is generally because the air has not been able to escape.”

They tilted up the vessel and Leon could see the molten bronze had risen to the top of the mould’s base. “Just the right amount of metal,” said Molon. “Now, if you come again in a few days we may be able to show you the rough cast.”

Leon once more sought Molon’s shop. “You are in time to see the cast drawn up from the pit. Once up, we shall know whether the casting has been successful.”

In the casting yard Leon saw several men grappling with ropes that went under the heavy mass. They tugged and heaved until their burden was out. They then righted it on its base. Work on it began at once. The fireclay covering was chipped off and water poured on the mould to soften it. Next it was tapped at carefully with mallet and chisel. Soon the stuff began to come away in lumps. More water, more tapping, and metallic shapes appeared in the form of bronze rods.

Molon comprehended Leon’s perplexed look. He peered at the casting.

“It’s a good cast as I said it would be. My prayers to Hephaistos have been answered. Don’t worry about the rods attached to the statue. Before we made the mould we affixed wax rods to ensure that the metal would reach the furthermost recesses of the mould. These wax rods, on melting, formed channels through which the molten metal could flow directly to its destination. We shall at once begin to cut off the rods. The cast has to go back to the sculptor, who will give his finishing touches, then return it to us for the polishing.”

Some little time after, Kephisodotos the sculptor sent word to the inn. Leon entered the studio and his eyes were immediately drawn to the shining bronze group sitting on its stand. It was perfect and Leon admired the warm-coloured metal. Kephisodotos was pleased with Leon’s appreciation.

“I’m glad,” he said, “that this piece of statuary will be put up in a temple for all to see.”

Leon paid Kephisodotos, who arranged for the group to be dispatched to the Piraeus to await the next ship sailing for the west. The sculptor then called for his wife to bring a glass of wine for the departing visitor. She appeared with her young son clinging to her skirts. Seeing Leon, he lost his shyness and greeted him with a lion’s roar. Having drunk his wine, Leon said “I hope someday to admire one of your statues”.

The child drew himself up and announced, “I will make a statue of Aphrodite and I will make Eros bending his bow and a faun catching a lizard and …”

“There, there,” interrupted his father, “say farewell to our visitor. Goodbye! Leon of Massalia.” 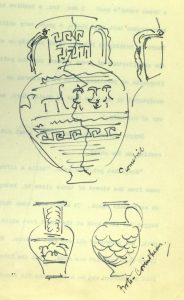