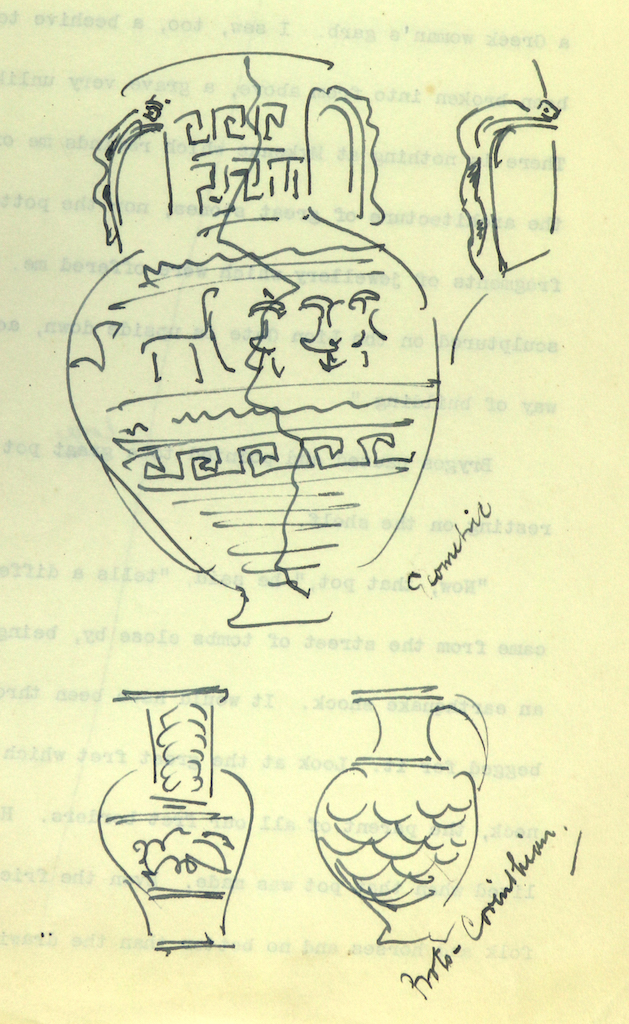 …. On all sides martial array.
Soldiers, well armed with lances and darts,
Shield and cuirass, plumed helmet and greaves
Aristophanes, The Frogs 1016-1017

While wandering through the market Leon had found an old bronze dagger covered with dirt. He picked it up. Here and there he could see traces of figures and a dull sheen on silver. The men at the stall said it had come from Mykenae with a lot of other objects. The weapon had no sheath but Leon, after haggling, bought it for a few drachmas.

With oil and a rag that Thalia had brought him he set to work on his find, rubbing gently. Patience and labour rewarded him. The silver began to show more clearly. It was inlaid in the blade, and Leon made out figures: a lion pursued by hounds, hunters with spears following.

Leon needed a sheath to protect the blade. He wanted a bronze one so sought advice from the coin-striker who recommended that he go down to the armourers’ quarter at the Piraeus.

“When the Piraeus was rebuilt,” he said, “the armourers here gradually left and set up in the port. It was more convenient both for the craftsmen and those commissioning arms. Of course there’s not much being done now and I rather think Demosthenes, the shield dealer, is having a hard time. You should have seen his place during the war. Such a clamour of hammering and the walls covered with shields hanging from their nails. However, you’ll find a few places where helmets and breast-plates are being reshaped and swords, arrow and spear points, sharpened. Perhaps you may find a sheath to fit your dagger.”

So one fine morning Leon walked down to the Piraeus. Here and there he paused to look at flowers, birds or other creatures. They took his thoughts back to his home and his family. He was looking forward to his return.

Arriving at the port he made his way to the armourers’ quarter. Workshops and storerooms lined the roadways behind the quayside warehouses. Leon looked in at one place where some hammering was going on. Two men were busy at a forge, repairing a shield. This was the factory of Demosthenes, they said. Looking around Leon saw a few dull shields hanging here and there. In the old days there might have been a dozen forges glowing, riveters, embossers, leather-cutters and device-painters all hard at work. The men recommended Leon to try for his sheath a little further on, at a sword-making works. Leon thanked them and left.

The sword-making works occupied a large building but, again, there was little work going on there. Inside was only one elderly man who was beating an old sword into a sickle on his anvil. He told Leon the same tale. No one wanted swords nowadays. He looked at Leon’s dagger with interest, remarking that he had done wonders with neglected weapons through careful cleaning. He thought that he had a dagger still in its sheath somewhere, which he would look for. Sure enough he returned with the weapon. It was rusted in its sheath of bronze, but by pouring in some oil and with gentle tapping and hard pulling, they got it out. The handle was of ivory and the blade of iron.

The armourer cleaned the sheath which, being bronze, had not suffered much from neglect. It was nicely inlaid with silver and the rings for attachment to the belt were unbroken. Leon’s dagger fitted it well so he bought it and the man threw in the rusty dagger too. Leon thought to himself that cleaning with charcoal and oil might work wonders with the blade. The armourer felt sure the rusty iron dagger was old, although not so old as Leon’s bronze weapon. He told Leon that there was a whole heap of broken armour in a shed outside waiting for the collector of broken metal. The Etruscans used to send for smashed bronze but they had not been lately. Leon visited the shed. The first thing he saw was a helmet with a hole in it.

“That’s a Corinthian helmet” said his guide. “You can tell it by the long nose guard and the way the cheek pieces completely hide the face”. Such headgear gave more protection than the Attic helmet. The crest was gone but he could see the rivet holes. The crest was an additional protection in fighting for it absorbed the shock of blows which would otherwise stun a man. The plume shaded the head in bright sunshine to some extent. That was the worst of armour. If the sun shone brightly as you stood in line, you were almost roasted before the fight began. Besides, the flash of brightly polished armour often gave you away to an enemy. The armourer was evidently an enthusiast. He spoke of the way Greek armour fitted the body, unlike Eastern armour with its visor and neck defence. The Greek helmet, however, was modelled on the head and a man would need one that was made to measure.

The body armour had to fit neatly too while the greaves should fit the shins exactly and be of the right length to avoid chafing the ankles. He thought there was a pair of greaves somewhere in the heap. Leon was interested to hear this and the two went through the pile. It was a tangle to turn over. Broken body plates with rotting leather straps still attached to them formed the greater part of the mass, but there were several bashed shields and snapped swords. These blades, of course, were of iron and were very rusty. There were broken spear heads and other fragments. At last they came to the greaves and Leon saw that though dirty and green they were well made and ornamented. Perhaps they had formed part of a general’s armour. He thought they might fit his father and so decided to buy them. Looking again at the Corinthian helmet, the armourer said it could be repaired so that one would hardly see the hole. Leon bought the greaves after a little haggling and arranged for the helmet to be repaired and a crest added.

Taking leave of the old armourer Leon made his way to the harbour to view the sea. He walked round the quays and stayed awhile to watch a ship landing her passengers using the boats that swarmed around her. Eugenia might be one of those passengers. She had said she was coming on to Athens later. For a moment he thought he caught sight of her in a boat among a huddle of passengers, but no, it was an older woman. It was likely also that she might travel overland and thus avoid the long sea journey. At last, he turned and made his way back to Athens, with two daggers in his belt.