My peplos, which with pains I wove
The warp was fine, also the weft.
Homeric Hymn

Leon sat in a sunny corner of the courtyard watching the swallows as they flew to and fro among the surrounding rafters. He was recovering from a chill he had caught during his running practice.

Near him, sitting on the well-head, was Thalia, twanging a toy lute. Its music mingled with the birdsong. Tiring of her instrument she slipped to the ground and ran to fetch her doll, Myrrhinne. She proceeded to drape the terracotta doll, its jointed limbs waggling, with a width of material. She stretched out the cloth, surveying it, and mused “If I had some tiny little brooches I would make this into an Ionic dress. As it is, Myrrhinne will have to be content with a Doric peplos.” She folded the material and put the doll inside, remembering “it’s my birthday tomorrow!” She then announced “I’m to have a new dress, a Doric peplos. The weaving maid has promised it for today. It’s a pretty dark red with a black stripe for the border. Mother says my next birthday dress must be a saffron one in which to appear before Artemis. We shall have to go to the fields in the autumn to gather the crocuses for the dye. I don’t mind gathering the flowers but it’s fiddly work picking out the orange centres.” That explained the ‘click-clack’ of the weaving shuttle Leon had heard for the past week, now thankfully ceased.

Thalia ran to the entrance of the women’s quarter and expectantly asked “Is it finished?” Leon could hear her begging her mother to let her handle the garment. A moment later the child skipped into the courtyard with a roll of cloth over her arm. Her mother followed, chiding.

“Look.” Thalia held out the dress for Leon’s approval. “Mother, may I try it on for one moment? Here in the sunlight.”

“Certainly not, child. Not in front of our visitor.”

“Oh, Leon won’t mind. He’d like to see how my new peplos looks on me; wouldn’t you, Leon?” She turned to her mother. “If you only knew how I hate wearing my sister’s old things. Look at the dress I’m wearing, it’s far too big!”

Her mother laughed, “When I was your age I was wearing my grandmother’s old clothing.”

Thalia sniffed. “Well, I’m glad I don’t have to. Oh! How beautiful,” as her mother displayed the length of material and shook out the folds. It was a piece of soft light woollen weave in a fine rust red. A broad black stripe ran along both ends. Its width exceeded Thalia’s height and it was double that in length. The child could not contain her pleasure. She put her hands to her shoulders, removed the pins and her outer dress fell about her knees. She stood up in her ankle-length Ionic chiton and held out her hands for the new material.

“You can’t wear it yet”, said her mother. “See, these untidy strands haven’t been cut away – it has come straight off the loom. And it has not been washed. If you are good I will get the maid to embroider it all over with stars, in the new style.”

“Please, please, for a moment only”, begged Thalia.

She slipped in between the material, which her mother had folded in half, and pulled it up until she could see her feet. Her mother then folded the upper part so that it fell to her daughter’s waist.

Thalia was busy with her pins. Grasping the material at her shoulders she stuck a pin in each side. Next she took the cord from her old garment and tied it round her waist.

Phylinna left her daughter arranging her outfit as she withdrew to oversee the slaves cooking.

“That stuff doesn’t fall right,” she complained, trying to arrange the folds. “If you were a girl I am sure you would lend me a hand.”

“Well,” said Leon, “although inexperienced, perhaps I can be of some assistance.”

“Have you looked at the marble maidens supporting the Erechtheion’s porch on their heads?” Thalia asked. “I want my new dress to fall in the same beautiful folds.”

“I cannot say I’ve looked too closely at the karyatides’ robes. However, I’m not sure how easy it would be for you to replicate them.”

“Do help me,” implored Thalia tearfully, and Leon found himself kneeling beside her while he clumsily tried to arrange the pleats.

“That’s close enough”, said Thalia at last. “How I wish I had a mirror here.”

She strutted round the courtyard, imitating a fine lady, then stopped opposite Leon who had resumed his seat. “How do the women dress in your country?”

“Just as they do here, although not in the latest Athenian fashion. But the Ligurians around us and the Gauls still further north dress quite differently. The men wear trousers to the ankle, and in winter both men and women wrap themselves in cloaks made from the skins of foxes, wolves or even bears. They would be shocked to see the Athenian girls bare-armed and bare-necked. In fact, the way Greek women dress is very different from other nations, such as the closely pleated dresses of fine linen worn by the Egyptians and the tightly fitting silks of the Eastern peoples. I have heard that Babylonian ladies wear dresses cut to their figures and stitched up!”

“Then they’d have to go to bed in their clothes and wear them until they fell off!” asserted Thalia.

Laughing, Leon continued, “We Greeks always aim at simplicity. It’s a shame that the old Ionian fashion of patterning the fabrics is coming in again. I much prefer the plain garments that some of the older ladies wear back at home.”

“My aunt talks like that,” said Thalia. “She says that dressing well is only a matter of arranging folds to fall beautifully. That’s difficult if you haven’t a slave girl to arrange them for you. But I must take this off now or it may get creased before I can wear it properly.”

She untied the cord and withdrew the pins.

Leon held the folded material while she slipped into her old dress. Then she took her treasure from him. At the doorway she turned and with agrin said, “You will make a good maid.” Leon jumped up but she had disappeared.

However, she came out a few moments after quite unconcerned. Would Leon play knuckle-bones with her? Everyone else was too busy, even the youngest slave girl. It was a girl’s game but Leon was willing to oblige. It helped to pass the time while he was regaining his full strength. 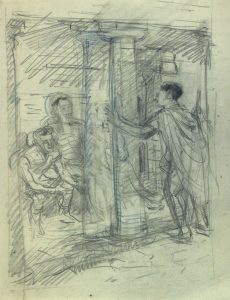