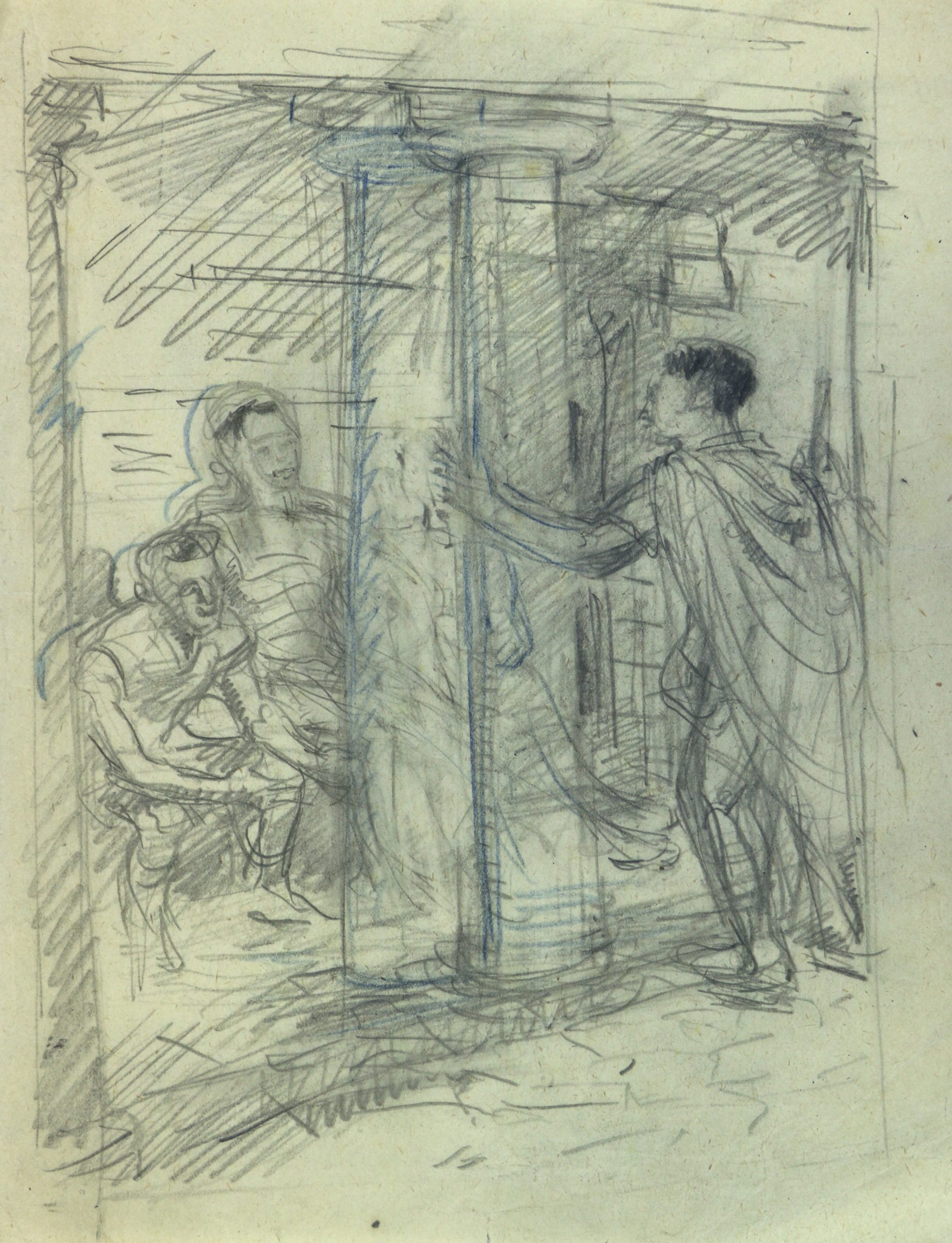 One morning there was bustle at the inn. Rooms were being cleared out, hangings beaten, and floors scrubbed, waxed and polished. Smells wafted from the kitchen. The landlady ran to and fro, her servants scuttling before her. Leon, swept into a corner by the commotion, was presently joined by Thalia. With great solemnity she announced, “A new guest.”

“Yes. He is a great man with many servants. They landed at the Piraeus at dawn and a fast messenger has brought word that he and his retinue will soon be here.”

There was a call for “Thalia”, and the child, making a grimace, ran off. Leon thought he might as well keep out of the way until the visitor had settled in. He therefore decided to visit the Painted Stoa with the mural paintings by famous artists.

When he got there he found the Stoa and its famous colonnade had quite a number of visitors, although few seemed to be studying the pictures. The covered way was a good place in which to stroll away from the wind or the sun. In one corner a group of men listened intently to a shortish man who Leon recognised as the philosopher Sokrates.

Leon turned his attention to the wall paintings. Here was the Panainos’ Battle of Marathon, full of bodies in violent movement, flying arrows and brandished swords. The dead and wounded littered the foreground while on the right the fight was raging in the water with part of a ship’s deck visible.

A boy’s voice piped, “Sir, may I show you the chief figures in this great fight?” Looking down, Leon saw an urchin of nine or ten years, his feet bare, his only covering a ragged chiton. He had a tangled mop of dark hair and large eyes. “I can tell you everything about the battle.”

Leon smiled and asked him to point out the figure of Aeschylus. The lad’s face fell, “No one seems to be certain of that, but there is his brother, with a hand on the ship’s side. He’s calling the Greeks to take hold of the ship. But look, he’s unaware of the Persian behind him with sword raised to cut off that hand. What a blow!”

“Where is Miltiades?” he asked.

“There he is, on a mound towards the back. He has his helmet pushed back so that his men recognise him. On the other side are the Persians struggling in the swamp with the Greeks after them. And here is the dog that followed its master to the battle. See, it is defending him by biting his attacker.”

Leon gave the lad a coin and dismissed him.

Passing along, he noticed someone occupied on a portion of the wall. A painter with brush and palette was working carefully and expertly. He was filling in scratches and bare patches caused by weather and age. The restorer, who had been bending down to the lower border of a panel, straightened himself and stretched. He was an old man with wrinkled face and long straggling white hair.

“You have matched the colour perfectly. It looks almost new,” Leon commented. “Polygnotos would have been pleased to see how carefully you have restored his work.”

“Ah,” said the painter, “many times he clapped me on the back for careful work.”

“I was only a youngster, but I remember him as a man who exacted obedience, who had things done just as he required. He used to say there was only one way of doing a thing right. Many’s the time I heard him order the workmen to scrape off the damp plaster because it wasn’t prepared to his liking. However he was a considerate master and kind to those who carried out his instructions. I remember well the excitement when the porch was finished. People had never before seen the gods and heroes painted lifesize.”

“And Panainos’ brother, Pheidias,” asked Leon, “have you seen him?”

“Yes, many a time, and on this very pavement. A lively and witty man. He used to say that there would be an end of sculpture now that Polygnotos with a few strokes of his brush could make his figures breathe. He especially admired the way Polygnotos had of portraying his subjects with the mouth open, speaking or singing. He could even show the teeth.”

“Did you, by chance, also see Perikles?” Leon inquired.

“Of course,” replied the restorer “but he was a different man altogether. He was an aristocrat and looked it, every inch of him. He was fond of Pheidias though and they sometimes came to the porch together. Perikles generally wore his helmet to hide the high domed skull folk laughed at and called the “Odeion”. He was a handsome man but his face was usually grave and set as if he carried all the cares of the city, which indeed he did. There was prosperity in his day. Money poured in and all the craftsmen from east, west and south hastened to the city to help in its adornment – masons, carvers, sculptors, painters – especially sculptors. It was a marvel to me how Pheidias could keep all those stone carvers going at it and doing their best too. Polygnotos used to say, ‘It’s all very well for Pheidias to have a whole army of sculptors doing work for which he takes the credit, but for myself, when my men have flatted the wall for me I must work at it alone. None can help me then.’”

The old painter turned again to his task and Leon paced slowly past the wall, stopping before a depiction of the taking of Troy. The background was of a soft shady tone, lightening gradually towards the top into a gentle grey. On this the figures had been drawn with a firm line and filled in with flat colour. The style was like that of vase painting but more subtle and more realistic. There was no shading but the painter had created the illusion of depth by strengthening the contour in places so that one felt the presence of receding planes.

Old-fashioned as the work now looked, Leon felt the restraint and power of it. The beautiful sinuous line far removed from the hard contour of the pot-painters, the feeling for proportion, the knowledge of the human form that was reflected in the perfect construction and movement of the figures. Painting, he thought, might have changed in its aims and methods but it would never again be so lofty and noble. 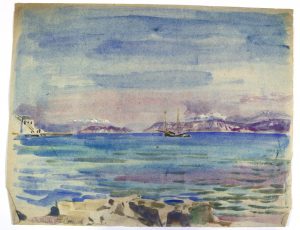