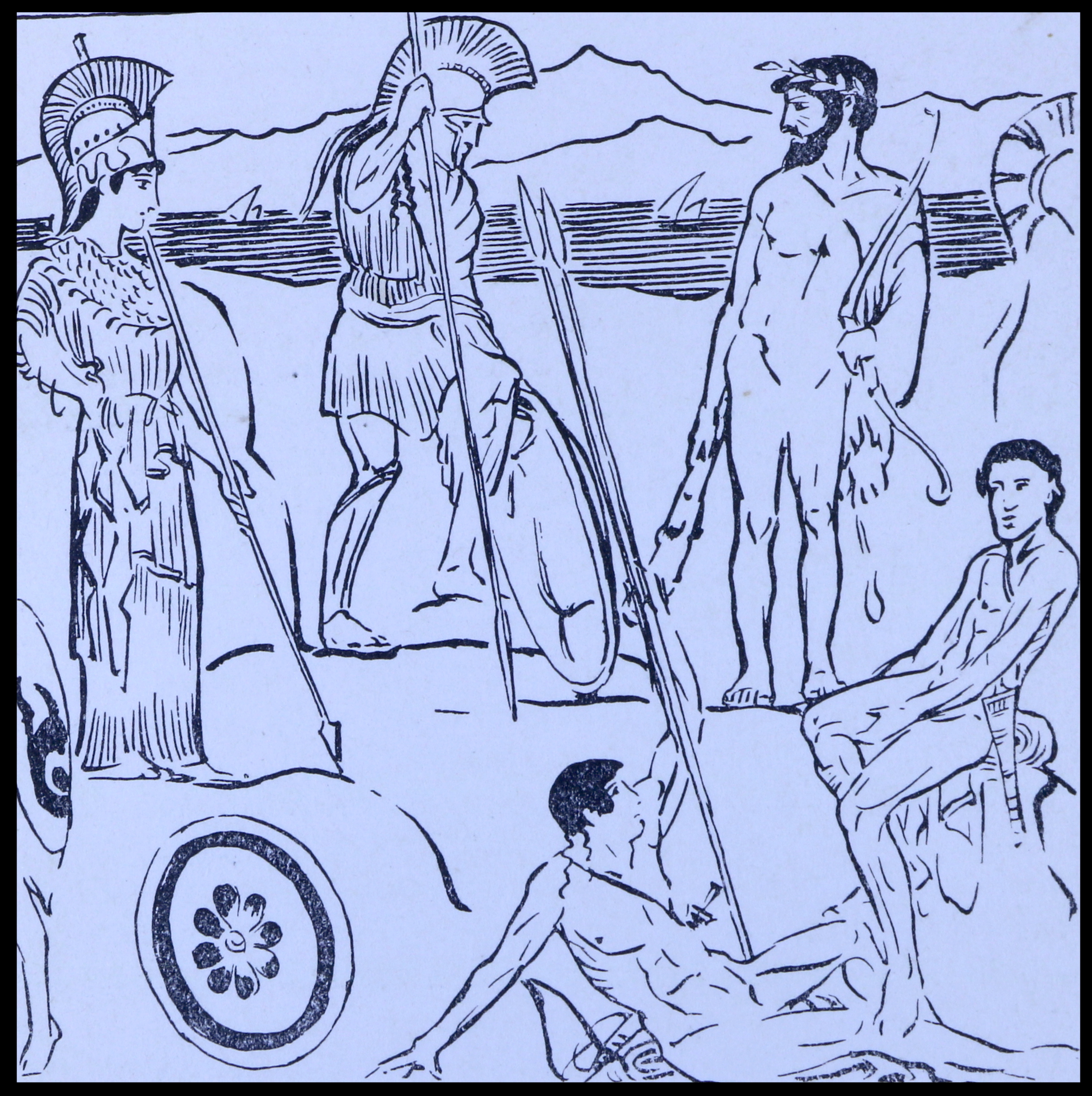 …by the artist’s brush
Expertly painted

Zeuxis suggested that they pass the rest of the evening pleasantly by enlightening their young friend Leon. “We painters shall, in turn, discuss what we have discovered. I myself have already spoken of the work of Polygnotos who was content with a simple background – brown below for the ground merging to grey above to suggest the sky. The more distant figures were placed higher than those nearer, but all were drawn to the same scale. In other words there was no perspective, nor was any figure obscured by one in front. Polygnotos’ painting was processional, with characters distributed along the space but all in the foreground. Such a style was suited to mural painting. One never lost sight of the wall nor of its surface.”

“When I began to paint panel pictures, however, the four edges of my frame set limits to my composition: my picture became a window. Through a window one sees many people. The further off they are, the smaller they appear. So I gave a sense of depth to my work. But I also realised that this affected my views on colour. I noted that the sun shone with a warm yellowish light, but that the shadows were sometimes bluish in tone as a result of the northern sky casting its blue light into them. When I understood that shadows were never black all was clear to me.”

“Some time ago one of my pupils was painting the portrait of a young girl wearing a bright yellow Phrygian cap. He complained that there was no yellow pigment available that was bright enough to match the cap. Glancing at the picture with its dingy yellow and then at the model, posed against a neutral background, I understood where painters, myself included, had so far failed. Taking up my pupil’s palette and brushes I began to work, not on the cap, but on the background. For I saw that the hue surrounding the model’s cap was not neutral. Instead it appeared tinged with violet. Every touch I added made the yellow stand out more brightly. My pupil was astounded that, without touching the cap at all, my subtle additions to his background had achieved a sparkling yellow.”

“Since that time I have never painted any neutral greys. They may look neutral to the ordinary observer but they are always tinged with the colour that is complementary to that of the object against them. You may or may not see all this in my pictures for the subtlety of it can only be perceived by one accustomed to look for these variations.”

“What say you, Parrhasios?” asked Zeuxis, “Will you take up the tale?”

Parrhasios bowed to Leon, saying “Forgive me if my remarks are technical. I wish that I had my pictures here to demonstrate of what I speak. Using the methods of Zeuxis it is possible very nearly to imitate what one sees but I wished to go further, so as to make the spectator imagine that the actual object stood before him.”

“My discoveries enable me to achieve a degree of realism reached by no other painter.” He paused to look Zeuxis in the face, who returned the stare with interest. Parrhasios, averting his gaze, continued, “The first matter concerns drawing in light and shade. It is not sufficient to make one side of a figure light and the other dark. As Zeuxis says, the dark is not wholly dark, only illuminated from another source. If you look at that bust of Hermes it will explain my thought clearly. The eye, upper lip, chin and ear on that side of the head next to the window appear dark, as one might draw them with charcoal on a plaster wall. But, turning to the side of the face in shadow, quite another lighting is evident. What is dark on the light side becomes lighter. This, of course, is because those parts receive their light from below. Note also that whereas the darks on the light side are sharply defined, the forms on the dark side are soft and vague.”

“There is still another point to be noted about the bust. If you look closely you will see that the sharply defined contour of the light side against the background merges into the grey background at the point where the shade begins. To recognise those points of invisibility is to reach a realistic representation. It is when outlines are drawn completely round the contour that figures remain flat.”

Zeuxis was scornful, for he thought his eyesight excellent and claimed that he had already seen clearly what Parrhasios had just pointed out. The two began to raise their voices and a hot dispute seemed likely, when Leon interposed to ask what were the other matters Parrhasios had in mind.

The painter smiled and said, “These are also somewhat technical and I should apologise in advance, Leon, for perhaps boring you with them. Zeuxis has mentioned that shadows outdoors receive light from the northern sky, but beyond this every object tends to reflect its colour on to surrounding objects.”

Parrhasios here picked up a crimson scarf and held it near the side of the bust that was father from the light. It was immediately obvious that what had been before only a dark grey tone was now suffused with a rosy hue. “If I replaced the red with another bright colour” he went on, “we would see that hue reflected in the shaded parts of the bust. An artist’s attention to this reflection of one object upon another produces a clearness of colour. Let us suppose that a black cat is lying on a couch surrounded by brightly coloured cushions and hangings. It would be possible to paint the creature and make it look intensely black without using any black pigment.”

Zeuxis looked at him incredulously.

“Yes,” said Parrhasios, “I mean it. In fact, the cat could be made to appear blacker than if black pigment alone had been used. It would be easy to prove my statement.”

Here Zeuxis assumed an air of boredom, saying, “Agreed, but really you are only expanding what I said about the colours of shadows. What is the last matter on your mind?”

Parrhasios continued,“You have rightly spoken, Zeuxis, of the warmth of sunlight and the coolness of shadow. We must admit, however, that there is also a beauty of colour and tone when the sun is not shining. The same grey light occurs indoors too, as in my studio, where the window faces north so that while I am working my painting is flooded with a cool illumination. Under these conditions I have noticed that near objects have cool lights and warm shadows, while distant ones have warm lights and cool shadows. I am persuaded this is owing to the depth of atmosphere. Armed with this rule I am able to give depth to my pictures, to bring objects forward or send them back at will. I would not fear to challenge any painter to compete with me.”

As he concluded he looked meaningfully at Zeuxis who, evidently puzzling over Parrhasios’ theory, was frowning deep in thought. Then he looked up and meeting the eye of Parrhasios he laughed somewhat harshly.

“A fig for your theory,” he cried. “What you have said has been most interesting and I must remember you are my guest. Nevertheless I am willing to put a picture up against one of yours, Parrhasios, and our young friend Leon shall say which he deems the most realistic. He shall be Paris judging between the goddesses.”

Leon, somewhat embarrassed, protested that was inadequate for such a task, but the two painters asserted he was the man most likely to make a fair choice. “We would hesitate to submit ourselves to a professional,” said Zeuxis.

So Leon agreed to meet them on the next day in Parrhasios’ studio, first exacting a promise that his judgment would not cause offence to the loser, and that the two painters would remain friends whatever the result. Parrhasios laughed and said “Do you suppose that Zeuxis and I have ever met without quarrelling? He thinks he is the greatest painter in the world and I am sure that I am not. However, our opinions have never caused us to come to blows.” 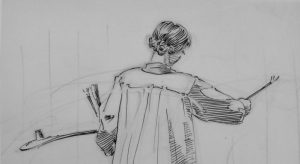