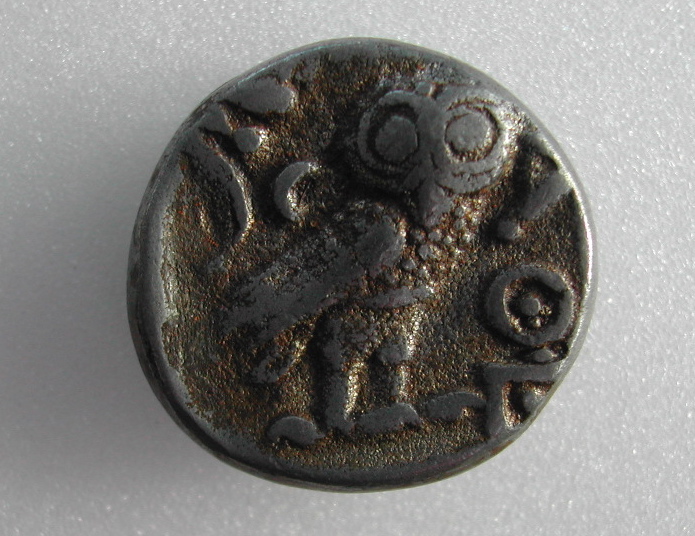 Those Athenian coins,
Finely engraved, well struck,
Acknowledged the world over
By Greek and by Barbarian,
We make no more. Instead
Base copper and poor dies
Are now our counters.
Aristophanes, The Frogs 721–726

Leon took early opportunity of visiting Antikles to thank him. He found the street with the shrine of Stephanophoros. Antikles was evidently a coin-striker, and the subdued noise of hammering came from within. As he approached the door, it opened and a man carrying a heavy package over his shoulder came out, accompanied by an armed Scythian guard. Just then Agias the slave crossed the courtyard and, seeing Leon, invited him in.

“The master,” he said, “is in his workshop. Be pleased to follow me.”

Leon crossed the court and entered a one-storey building, its walls of rough sundried bricks, the straws sticking out of them. He found himself in a long workroom with barred window openings along both sides. Just below the windows were benches at which men sat working. At the far end, in a recess, was a charcoal furnace with crucibles inside, a slave busy with the bellows. Elsewhere workmen were striking anvils with heavy hammers.

Antikles, wearing a leather apron over his tunic, was in discussion with a worker seated before a balance and weights. He turned as Leon approached and greeted him warmly. “I trust you slept well. I fear that a coin-striker’s establishment will be of little interest to you. But if you will pardon my curiosity, I would like to know from which colony you come.”

Leon smiled and, taking a coin from his wallet, asked if Antikles recognised it. The coin-striker glanced at it and exclaimed: “The head of Artemis! So you are from Massalia. Your folk are fortunate to be far from the troubles which have beset us these last years.”

Leon replied, “I am pleased to find so much life and cheerfulness in a city which has suffered so much. I have come to Athens to learn about its art. My father and I felt that I should find in Athens the best masters and finest artists. I am interested in your craft but have never been inside a mint.”

Antikles was enthusiastic and only too pleased to show Leon what his men could do. “At present we are working on a new series of coins. Masyntias here helps me design them. Those sitting at the benches are engaged with the dies. It is tedious work and requires good light. Each coin, for its striking, requires an upper die (a punch) and a lower die (an anvil), both made of bronze.” He moved to the nearest bench, “This man has been working for several days on the head of Athene. One must not hurry when hollowing out, for if too much is cut away, it cannot be put back.”

Leon examined the die, a disc of bronze set firmly in a bed of cement. The head of the goddess seemed to rise up from the warm bronze as if in relief. “It looks perfect.”

“It still requires some chasing and burnishing”, explained the worker. “When finished, the die will be hardened and then handed to the striker.”

Turning back to Antikles, Leon took an Athenian coin from his wallet and, showing him the owl face, asked, “What means the crescent shape on the left of the owl’s neck? It cannot be part of a letter surely?”

“My young friend,” returned the craftsman gravely, “the sign represents a waning moon. What does that convey to you?”

“Marathon!” he exclaimed after a short pause. “Marathon was fought when the moon was waning, because, I remember, that was why the Spartans weren’t there. They didn’t want to set out before the moon was full. It wasn’t lucky they said; and so they didn’t reach Athens until all was over.”

“And that little moon,” said Antikles, “tells the Athenians that they drove off the Persians without the help of the Spartans. The upright olive leaves on Athene’s helmet are an additional reminder. Athens is proud of her olives.”

Antikles then reached for a box on a shelf above one of the benches. It was full of old coins. He picked a few out and placed them on the bench. “These coins are more than a hundred years old. As you see, they vary little from the current Athenian coins. Look at this”, he continued, taking up a large coin, a dekadrachm, with a smiling head of Athene, her helmet’s crest clearly marked. He turned it over and showed an owl with wings outspread. “This was issued after such a rich vein of silver in the Laurian mines had been opened that the state hardly knew what to do with the ore. So, for ten years every citizen could claim an annual grant of ten drachmas.”

“Yes,” remarked Leon, “I remember reading about the ten drachm dole in Herodotos. Themistokles persuaded the recipients to give up the grant so that triremes might be built with the money. It was well he did or where would the Greek states have been when the Persians came?”

“Sadly the veins of silver have given out now”, Antikles continued, “so we have had to fall back on copper with a thin coating of silver.” He closed the box of coins and replaced it on the shelf.

“These coins have come down to me from my ancestors. We have always been coin-strikers; but my only son fell at Aegospotami so the line will end with me.”

Leon begged that before he left he might observe the striking. Antikles led him to the chief striker, who was about to adjust a new die in the anvil. When the die was firmly fixed on the anvil, with a pair of tongs the striker took up a ‘blank’, which was being heated to softness in the furnace and laid it on the die. Then he placed the punch-head on the blank and struck three times. At the third blow he made a gesture of disgust and taking up the coin, now impressed with a relief of Athene’s head on one face and the owl on the other, tossed it back onto the tray among the heated blanks.

“Ah, the punch shifted”, said Antikles. “But the metal isn’t wasted, you know. Those blanks have already been carefully weighed and clipped. Athens’ coins have always been known for their correctness in weight. Of course, exact positioning is another matter. Even the most expert striker cannot be sure of getting every bit of both faces on his coin. He can see where his punch goes, but not the die below.”

As the moneyer conducted Leon to the threshold he said, “Let us hope that soon we shall be able to abandon this accursed Euboean copper and resume our silver issues so that I can again hold up my head. Farewell! May the gods bless your stay and make it both profitable and pleasurable.” 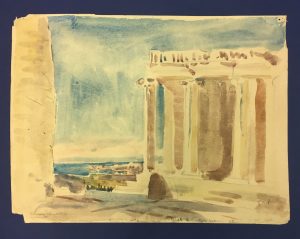