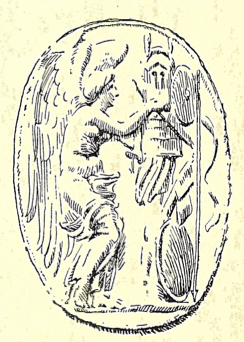 The tall cliffs high above the sea,
Their bases deep in foam.
Sophokles, Ajax

Antikles had promised Leon to take him to a friend who was an engraver of gems. So here they were, in a small room with a single bench running along one side close to the window. On it lay various tools: delicately-made bow drills, bronze implements with points of sapphire, and gravers.

When the two entered, Sostratos, the gem engraver, was at work on a greenish translucent stone fastened securely in its plaster bed. A sad-faced man of middle age, he showed Leon the gem upon which he was engaged. It was a bezel for a ring to be used as a seal, and the design was in the process of being hollowed out. Leon remarked that the method seemed much like that for making a coin-die.

“Yes” returned Sostratos, “that is so, but there is one great difference between the two crafts. If a mistake is made in the coin shop, the metal can be melted down and used again. But with gems, if the design goes wrong, the stone must be thrown away or broken up for smaller work.

“I work by and for myself,” Sostratos continued. “I used to have two good workers. My wife could polish a stone more expertly than I.” He paused then added “she died several springs back. My other helper was my son. After his mother’s death he was seized with unrest and complained that sitting crouched at a table was no job for a grown man. Last year, hearing that men were wanted overseas in the service of the Persians he begged me to give him the money to buy helmet, shield and spear. One fine morning he marched away with other Athenians. They crossed to Sardis, and then – silence. No message has come from my son and I fear the worst, for the army was to march into the heights of Pisidia where fierce mountaineers dwell. Rumour says that the real purpose of the expedition was to enable Cyrus the Persian to wreak vengeance on his brother Artaxerxes. Ships from Asiatic ports bear news that Cyrus and the Greek generals have been slain, and their men driven into the mountains to perish. As I sit here I think of my wife and my son.”

“Cheer up Sostratos,” said Antikles. “Your son will doubtless return to you safe and sound a wealthy man. Now, I must go, but my young friend would like to stay and learn about your craft.”

Leon bent to look more closely at the bezel. He saw it was being engraved with the figure of a flying swan. He praised the work’s delicacy as Sostratos held out a circular lens set in a bronze ring and invited his visitor to look through it.

“Wonderful!” exclaimed Leon. The lens had magnified the image of the swan.

“It’s glass,” said the gem cutter, “from Sidon where they alone know the secret of rendering it transparent and colourless without flaws. It enables me to do the most minute work without straining my eyes. We engravers are fortunate in being able to work on small materials which our clients can treasure and hide on their person if needs be. This past decade has been troubled and sculptors have had a hard time. Since fine houses beautified with sculpture attract the attention of informers, the rich have turned to the gem instead. Thus, while the fortunes of Athens declined the gem cutters have retained their prosperity and, if anything, increased and developed their art.

“The subjects have always been interesting to engrave. People want tokens of good fortune on their seals — deities such as Aphrodite, Eros and Heracles, but also victories, athletes, riders and family badges. Nowadays clients are even asking for portraits and themes of daily life, subjects requiring even more delicacy than before.”

The sudden clatter of a spear and shield hitting the ground outside made them both jump. Then the door burst open and in rushed a young man wearing a grey goatskin.

“Father!” he said as he knelt at the feet of Sostratos.

“My son,” Sostratos exclaimed, as he laid his hand on his son’s shoulder. “Rise Hippias and let me see your face. I feared you had passed to the shades.” He introduced his visitor and continued, “You look thin and tired, tell us of your travels.”

“How pleasant this place is with its little forge”, replied his son. “Without the help of that gallant leader, Xenophon, my bones and those of many good fellows might be lying hidden under the snows or left to bleach in the desert. When our generals were treacherously slain, Xenophon, though young and without military experience, quickly showed leadership and was immediately hailed as general. It was decided to march north to the sea. The worst time was when we found ourselves among the mountain passes in bitter weather. The mountains were full of the worst foes we met – huge men who hid behind rocks, and charged down suddenly, slashing with their knives. It was long, toilsome and dangerous marching, with no tents or other shelter. One day we topped a hill, however, and the cry was let out, ‘The sea, the sea!’ It was the Euxine.

“We all thought our troubles over, but the foreigners and the Greeks in that region were hostile and often we had difficulty in obtaining food and lodging. Being close to ten thousand in number, we required much food and so cities shut their gates against us. When we reached Byzantion we were so exasperated that we would have rushed on the city and pillaged it if Xenophon had not run through our midst and restored order.

“Most of the men, on reaching Sardis and being rested, volunteered for further service in Asia so that they might make some profit. I, however, felt the pull of home and stole away to the port and got a job as rower in a ship crossing to Athens.”
He went on: “I have, at least, brought something with me which may interest you.”

Untying a sack, Hippias emptied a quantity of dull-looking pebbles and stones onto the bench.

“Topaz, garnet, chalcedony – what a fine lump for a cameo – and amethyst. This ruby stone and emerald matrix I have rarely seen. But what is this plain little pebble, which sparkles in places?”

“That,” answered his son, “is called diamond, the hardest of all stones. It was given to me by a Persian whom I had helped. He asserted that our best tools would fail to cut it!”

“Well, we shall see,” answered his father.

Sostratos asked a question and passed a coarse file over one of the gems; the heads of father and son bent close together over the table, and Leon slipped quietly from the room. He would return later for some purchases he wished to make. 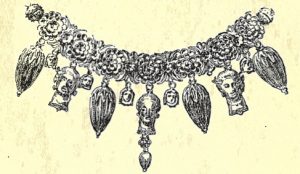