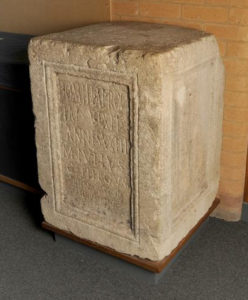 Sometimes museum objects—even very large ones—sit in plain sight for many years without being noticed by the experts and others to whose research they pertain. Imagine our surprise when our old friends Charlotte Roueché, a senior distinguished epigrapher with particular research interest in Libya, and preeminent digital classicist Gabby Bodard, who had done his PhD at University of Reading and created the Ure Museum’s first database, approached us last year with the discovery that a hitherto ‘lost’ Tripolitanian inscription was in the Ure Museum. It had been ‘lost’ because Joyce Reynolds and J.B. Ward Perkins listed it as such in their 1952 publication of The Inscriptions of Roman Tripolitania no. 693.

Of course it wasn’t lost to us. This funerary inscription for Domitia Rogata is found on the front face of an imposing block of gray limestone that came to the Ure Museum in 1961 through the generosity of Her Majesty the Queen, who bequeathed it to the University when she launched the building in which we reside, erstwhile called the Faculty of Letters and Social Sciences and now named in honour of Edith Morley. It is one of many ancient stones from Lepcis Magna found in 1816 and brought to the UK by the British officer Hanmer Warrington. Jeffry Wyatville, architect to King George IV, put them to use as a folly, for ornamental purposes, in the royal estate near the lake of Virginia Water, a.k.a. Great Windsor Park, where many of them still stand (restored as recently as 2012). After periods of waning interest and apparent neglect our stone apparently served as a sort of ‘touchstone’ for boyscouts.

I have spoken about it at Heritage Open Days, generations of students have used it to learn the rudiments of epigraphy, Peter Kruschwitz published it in Arctos 42 while he was a member of our faculty, typographers have admired it for its rusticated font, and it is rumoured that in previous years it was even used as a table (not under my curatorial watch!). It may be found on the Ure Database and also our museum’s website.

Nowadays Domitia Rogata’s tombstone proudly stands in the NE corner of the entrance to the Ure Museum. As the rest of the collection has been twice arranged around this imposing block you might well call it the cornerstone of the Ure Museum. Congratulations, Charlotte & Gabby, on your publication of it today in the 2021 digital publication of Inscriptions of Roman Tripolitania, which is freely accessable to all.