By Claire Smith and Alastair Culham

Some years ago Reading University helped supply some plants to the stunning display glasshouses at the Bombay Sapphire Gin distillery about 40 minutes drive west of us.  That has led us to a deep and long standing interest in the botanical components of perhaps the most botanically oriented of all alcoholic drinks: Gin.  Here we work through the major botanicals of Bombay Sapphire.  If you have a favourite gin then we’d like to hear from you and we’ll look in to the botanicals in that.

Bombay Sapphire gin is made using ten botanicals – seven of which we introduce here based on specimens in Reading University Herbarium.

Juniper forms the base of gin and is one of the key ingredients in all typical gins.

This specimen is from Sicily, and was collected in 1983. You can clearly see the berries – which are not true berries, but in fact small cones with unusually fleshy scales. The cones are most commonly used when they’re mature, but still green.

Meg Cathcart-James has written an Advent Botany blog post all about the delights of Juniper, and its festive and culinary uses – including gin, of course! 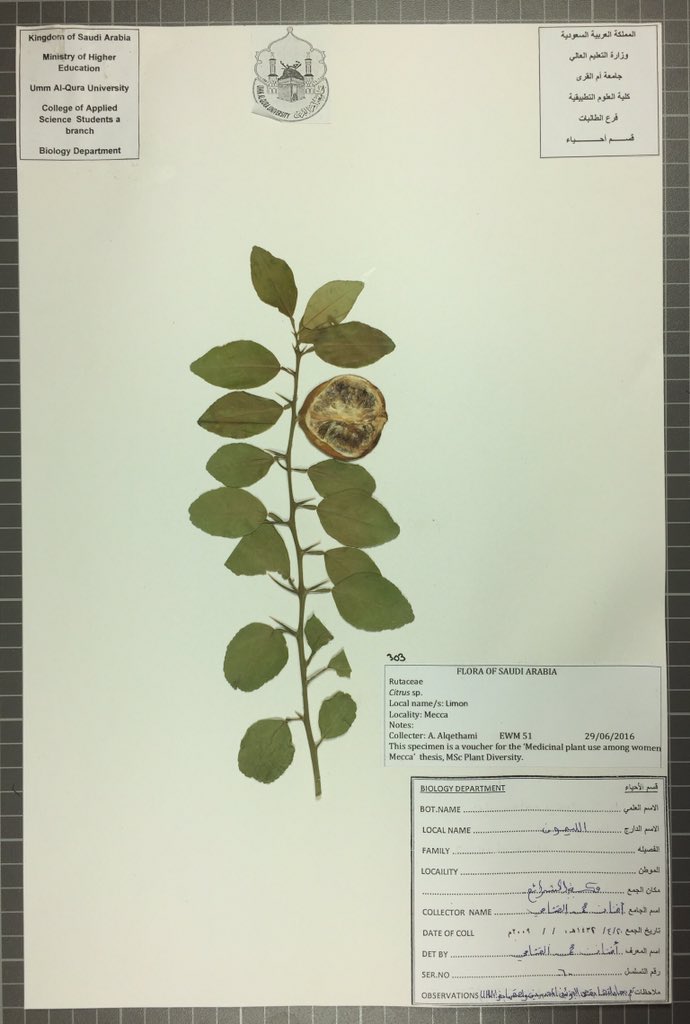 Hailing all the way from Saudi Arabia, this lovely lemon shows a slice through the fruit. It was collected for Umm Al-Qura University in 2016, and is a voucher specimen for a University of Reading MSc about medicinal plant use among women in Mecca.

We have quite a number of coriander specimens, many of them collected by one botanist, J. E. Lousley. 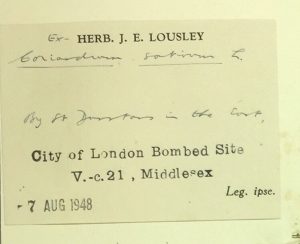 We have field notes (not just from Lousley) describing coriander as growing on waste ground, in rubbish dumps, and “under the bird table in my garden”. We also have several examples labelled as having been collected from bombed sites – this one is from 1948.

These are Angelica archangelica and Angelica sylvestris. The A. officinalis specimen (= A. archangelica) is another Lousley specimen, which I wanted to show you because it’s just so lovely! The sections cut through the stem are particularly nice, as are the plentiful seeds which have retained their aniseed-like smell. The flavouring in gin however, comes from the root of the angelica, which you can see on the A. sylvestris specimen. This one was collected by William Rowell in 1969, from a “damp hedgerow by canal towpath”.

As well as being used to flavour gin, orris root has been used as a herbal medicine throughout history. It is also widely used in perfumery as a fixative. As the fragrance develops the root smells different from the iris flower, and after preparation is described as being similar to violets.

Grains of Paradise from West Africa

We don’t have a herbarium specimen for Aframomum meleguela in the herbarium, but Ayo has written a fascinating blog post all about it, and how to differentiate it from Alligator pepper.  This member of the ginger family is very aromatics and the dried fruit are used in tropical west Africa as a flavouring.

These Prunus dulcis specimens are by Lousley again, from 1962, showing both the leaves and the roots of the almond tree. You may remember last December’s Advent Botany blog post about almonds, featuring a classic recipe for marzipan bacon! Or if you’re looking for something a little more sensible, you could try this 2014 Advent Botany blog post, featuring (thankfully mythical) severed genitals and cyanide.

And finally we have liquorice, Glycyrrhiza glabra. This particular specimen doesn’t include the root which, like angelica, is the part from which the flavour is extracted.

If you’re thinking about planting your own gin garden (and who isn’t?), the Craft Gin Club have an article about three gin-inspired gardens from this year’s RHS Chelsea Flower show, where the University gained a Gold medal for its education exhibit on potentially invasive plants from gardens.

We hope that next time you drink a gin you’ll think about the plants that flavour it.

Well, the sun’s over the yardarm so time to sign off.