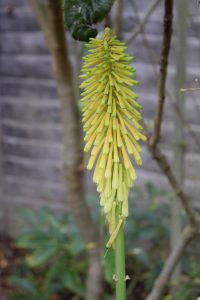 For those of you who, like me, find the experience of the short days and long nights of mid Winter a seriously depressing one, the existence of plants that defy the low light levels of December and remind us of summer long-gone is, at least to my mind, something of a miracle. There will be those who would find the incongruity of summer-flowering plants in winter disturbing and seek solace in the more traditional hellebores, snowdrops and may be the odd daffodil. But to me, anything that recalls the long, warm days and the ‘hot’ colours of summer is welcome. So when I saw in a nursery catalogue Kniphofia ‘Christmas Cheer’, I did not hesitate to add it to the order, despite the less than encouraging description, “the colour is a rather drab pale orange…” – after all, who could resist the ensuing comment, “yes, some years it’s coming out on Christmas Day”.

And it didn’t disappoint. The inflorescences begin to emerge in late November, long after any self-respecting red-hot poker has ceased flowering, and the flowers open in December. My photograph was taken on the 19th December [2015], and indeed bears out the catalogue description. Amazingly this evergreen Kniphofia is hardy and the inflorescences seem to cope with at least a light frost of a few degrees Celsius. The colour is not impressive and is not consistent with the description (and photos) provided by the US company by which it was originally distributed. San Marcos Growers in California obtained the plant from the Huntingdon Botanic Gardens just outside Los Angeles and out there at least the flowers are a more poker-like deep orange to red. May be the winter light levels at 34 degrees N elicit a stronger colour.

San Marcos Growers state that ‘Christmas Cheer’ is a hybrid of Kniphofia rooperi, an Eastern Cape species notable for its distinctive egg-shaped inflorescences [Photo, taken 13th October 2013]. This Eastern Cape species flowers through the summer, although the excellent monograph on the genus by Christopher Whitehouse, indicates the flowers can occur as late as November.

The inflorescences of ‘Christmas Cheer’ are certainly not egg-shaped, but more cylindrical in form. There is another distinctly late-flowering red-hot poker. This is K. bruceae, which for many years was treated as “K. praecox”, a name which no longer has any standing botanically. This species has much more cylindrical inflorescences and the photograph here was taken on 30th November 2017. This year, as I write, it is still in full flower and, like ‘Christmas Cheer’, seems unaffected by a light frost, albeit planted against the wall of the Laboratory at Wisley.

Kniphofia bruceae is another Eastern Cape species, considered rare in cultivation. The plant at Wisley was shared with us by Ventnor Botanic Garden. However, given that plants of this species are known to have been in cultivation as “K. praecox”, which means ‘early flowering’, could it be possible that this is the other parent of ‘Christmas Cheer’? Unfortunately kniphofias have proved impossible to resolve using molecular data, having hybridised in the wild most readily, so it is unlikely we will be able to unravel the true parentage.

But then, perhaps like the immaculate conception, the precise parentage is a mystery: but the result is Christmas Cheer.