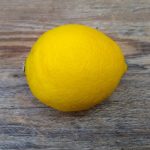 Lemons are small yellow fruit from Citrus limon with a waxy peel and a refreshing smell. Lemon zest and juice form part of the recipies I use for Christmas cake and sweet mincemeat.  In contrast, to “feel like a lemon”, as I did yesterday when my usual #AdventBotany blogging site went offline,  means to feel useless or out of place in British English.  In contrast, American English has “a lemon” to mean a useless thing or object.  In both cases there is the common ground of something that is not needed or not useful.

“worthless thing, disappointment, booby prize,” 1909, American English slang; from lemon (n.1), perhaps via a criminal slang sense of “a person who is a loser, a simpleton,” perhaps an image of someone a sharper can “suck the juice out of.” A pool hall hustle was called a lemon game (1908); while to hand someone a lemon was British slang (1906) for “to pass off a sub-standard article as a good one.” Or it simply may be a metaphor for something which leaves a bad taste in one’s mouth. Specific sense of “second-hand car in poor condition” is by 1931.”But why is lemon so pejorative? This is something that remains unclear to me.  There is 19th century use of lemon to describe an unpleaseant person who is best avoided and it might be this that has led to lemon in the BE sense as a person sitting/standing on their own ‘like a lemon’ but the transition to useless or silly is hidden.

The origin of the lemon fruit itself is somewhat hidden, but it is thought to have originated in northwestern India (Morton, 1987) and spread from there.  Recent work on Citrus genomics (Wu et al. 2018) has helped unravel the genetic origin of lemon as a hybrid between citron and sour orange.

Having unravelled all that and learned that lemons are half siblings of limes (a cross between citron and C. micrantha) I feel rather less like a lemon and more like a cup of tea (possibly with a shortbread biscuit).