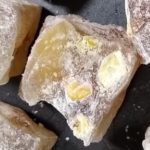 Where would Chistmas be without those dusty cubes of jelly-like substance covered in choking sugar dust?

‘Which way shall we take, Rosa?’
Rosa replies: ‘I want to go to the Lumps–of–Delight shop.’
‘To the – ?’
‘A Turkish sweetmeat, sir. My gracious me, don’t you understand  anything? Call yourself an Engineer, and not know that?’
‘Why, how should I know it, Rosa?’
‘Because I am very fond of them. But O! I forgot what we are to pretend. No, you needn’t know anything about them; never mind.’
So he is gloomily borne off to the Lumps–of–Delight shop, where Rosa makes her purchase, and, after offering some to him (which he rather indignantly declines), begins to partake of it with great zest: previously taking off and rolling up a pair of little pink gloves, like rose–leaves, and occasionally putting her little pink fingers to her rosy lips, to cleanse them from the Dust of Delight that comes off the Lumps.

As with Edwin Drood, our family do not all love Turkish Delight but it does get eaten at Christmas by those whe do not prefer chocolate.  So what is the botanical link here?

The key interest here is the use of refined starch in the production of modern Turkish delight. Starch is a primary storage byproduct of photosynthesis.  It is a polymer of glucose units linked by glycosidic bonds. Starch grains have been found in human inhabited areas dating back as much as 105000bp (Mercarder, 2009) and the isolation of starch is described in Pliny the Elder’s Natural History around AD79 (Bostock & Riley, 1855).  The use of starch to to thicken sweet and sticky throat medicines in Persia seems to date back to the 9th century AD. The point at which this evolved into the sweets known as lokum (known in English as Turkish Delight) is debated (Richardson, 2002) but there is no doubt that the Haci Bekir Company in Turkey, founded in 1777, lay claim to being the oldest confectioner of Turkish Delight in the world.  Curiously they state “After the discovery of starch by German scientist Constantin Kirchhoff in 1811, Hacı Bekir began to use this instead of flour” but Kirchoff actually worked on the chemical conversion of starch (which had been known for many centuries) into syrup (Prabook) so this story may owe more to marketing than history.  Whatever is the reality about the development of Turkish Delight, it remains a very popular Christmas sweet.  It is flavoured by a range of other plant products including rose water, lemon, pistachio and mastic.

So, when tucking in to the glutinous treat of Turkish Delight please think about this product being formed from glucose and starch, two primary products of photosynthesis.