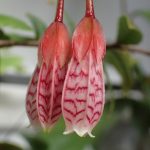 Diversity fascinates me and when a plant family is as big as the Ericaceae I can’t help but to want to understand the processes that led to such diversity. I tend to poke about in the edges of the family looking for the obscure and the wonderful, the most adapted and extreme.

In the case of the Ericaceae, most that know about plants would easily tell you that they know the family. There are many well-known members including blueberry, huckleberry, rhododendrons and of course the heathers. The one most closely associated with the festive season is the cranberry, yet there is much more to this family of plants than the glaring flowers of Rhododendron and the sour berries that we make into sauce.

The family is huge, I mean really huge, 4250 known species in 124 genera, placing it 14th in the list of most species-rich flowering plant families.

You would expect a family so big to have been around for a long time, evolving slowly but surely, and in the Ericaceae that is partially true. The earliest fossil evidence of the family is that of a small fossil called Paleoenkianthus from the late Cretaceous. Yet the diversity currently seen in the family is much more modern than that and driven by unique pollinators, volcanic ash, isolation and large-scale landscape change.

The Ericaceae is split up into various sub families, the largest of these being Ericoideae a subfamily containing nineteen genera, and 1,790 species, the most numerous of which is Rhododendron with a whopping 1000+ species (and growing all the time).

For ‘ease of management’, these subfamilies are then broken down further into various tribes.

In the subfamily Vaccinioideae sits a monophyletic tribe of over 1000 species called the Vaccinieae: the taxonomic home of the cranberry.

It is, however, also the home to a bunch of closely related genera that have evolved on two separate continents to fill the same niche environment. A range of plants that have tapped into two convergently evolved groups of birds to pollinate them and in doing so have become two of those extreme, obscure and wonderful Ericaceae. They make my eyes light up like a child opening the presents under the tree.

It is no surprise that the Epiphytic blueberries have diversified in an environment where they are able to grow unhindered by drought and fed consistently by leaf fall and mineral nutrients, as dust from further afield, from rain. Over 10% of all vascular plant species are epiphytic and much of this diversity is found in the cloud forest homes of these whacky blueberries.

It is however their relationship with birds that has taken them from the simple white and pink flowered bells of their close relative Vaccinium into the Christmas bauble bearing plants they are today.

In Asia they are pollinated by sunbirds, their downward-curved bills perfectly adapted to probing inside the flowers from the woody perches of the arching stems. The birds themselves are like a multitude of tree decorations and often have iridescent feathers and bright colours. In Latin America the blueberries rely on hummingbirds to do the work. No perching required here as the hummingbirds hover to gain access to the flowers, sparkling like jewels as they do it.

The plants themselves grip on to the bows of their tree sanctuaries with roots that form huge caudices – stores for the nutrients that have been scavenged for them by the mycorrhizae partners. They trail for meters from their canopy homes making their flowers as available as possible, in huge clusters, to their avian pollinators. Their fruit, often blue or purple and sometimes ridged or gnarled in shape, is also distributed by birds, and mammals, who move through the canopies transporting the plants and enabling them to persist at height in their cool montane cloud-forest homes.

Their inextricable link to these lofty mountain forests, where everything they need is so available for them, has left many species endemic and range restricted. These cloud-forests are under great pressure and likely to be reduced to just a tiny fraction in the coming years given the current rate of destruction and the pressures of climate change.

The epiphytic Ericaceae are increasingly vulnerable to this reduction in habitat and environmental change. In Central and South America 70% of the genera and 94% of the species are endemic to their regions and in Asia new species are being discovered in areas that are being logged and cleared for timber, tourism and cardamom production.

These plants are of value beyond the wildlife they support and the beauty they bring. Like their closest relatives in the genus Vaccinium, many of the neotropical species are edible and economically important to the local communities in the regions in which they grow. Some, such as Macleania rupestris, are cultivated. Like their North American and European relatives such as the Cranberry, Lingonberry, Bilberry and Huckleberry, studies have shown neotropical blueberries are also rich in antioxidants, in some up to ten times more than those found in a Blueberry.

So, this yuletide when you are spooning your cranberry sauce, laden with healthy antioxidants, over that turkey or goose just think of the Christmas bauble plants decorating their cloud forest homes surrounded by sparkling birds and at threat from the pressures of a world that doesn’t know they exist.