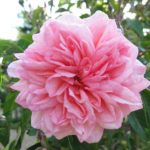 The third plant mentioned in our mystery Christmas entitled book is the rose.  I’ve chosen ‘Paul Noël’ as the most appropriately named cultivar for an Advent blog although our literary character is described in a way that perhaps does not conjure the image of a pale pink rambler –  “She should have been on a balcony, a rose between her lips…”.

Rosa ‘Paul Noël’ is a rambling rose with spines and pale pink flowers.  I’m claiming this is the only rose cultivar with Noël in it’s name but I’m looking out for a cultivar that includes Christmas.  (Please don’t say Christmas rose – that’s a hellebore!)

Perhaps I should have chosen ‘Deep Secret’, while you work out the novel, because it is a dark red, highly scented tea rose with only a few prickles. Much more suited to grasping in the mouth.

Some hybrids of R. wichuraiana

In 1891 R. wichuraiana arrived in Europe from Japan (Stuart Thomas, 1983).  This prostrate, semi-evergreen, rose produces masses of white, highly scented, flowers from August onwards.  It has few thorns which made it even more gardenworthy.  From the early 1900s R. wichuraiana was used in breeding programmes that yielded a wide range of cold tolerant and free flowering climbing roses, particularly ‘Dorothy Perkins’ and ‘Albéric Barbier’.  Less well known but still widely sold is ‘Paul Noël’, a hybrid with Rosa ‘Monsieur Tillier’ (bred by Bernaix in 1891; Quest-Ritson, 2015). R. wichuraiana is now treated as a form of Rosa luciae (see Gordon Rowley’s account in Thomas, 1978) but the name persists widely in rose literature.

The birth of ‘Paul Noël’

The January 1911 edition of Journal des Roses reports on page 6 that a M Tanne had presented two new hybrids of R. wichuraiana at the Rouen horticultural exhibition in July 1910, namely ‘Doctor Henri Neuprez’ and ‘Paul Noël’. The latter was described as of the very first merit.

An illustration of these two new roses appeared in the April 1911 edition of Journal des Roses (Cochet, 1911) and shows clearly the pink with yellow tinged centre of ‘Paul Noël’.  There is a good summary of the features of ‘Paul Noël’ at lesrosesduchemin.com.

Have you got the mystery book yet?