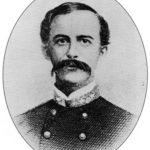 Joseph Christmas Ives is perhaps best known for his exploration of the Colorado River published as Report upon the Colorado River of the West explored in 1857 and 1858 (Ives & Humphreys, 1861).  Born on 25th December 1828, which might go some way to explaining his middle name and the choice of this #AdventBotany topic, he was an engineer, soldier and explorer (Crompton, 1999).  He is perhaps less well known for being the first person to cross the isthmus of Panama with a steamship, crossing in 1857, some 57 years before the Panama Canal was completed in 1914 (Ashworth, 2020)!  To discover how he achieved this you might have a look at Ashworth’s blog.  All that aside, this blog is about botany and Ives is one of the select people with a ‘Standard form’ name on the International Plant Names Index (IPNI, 2021) – Ives.  The standard form is used to make sure that a botanist who names a plant can be uniquely identified.

Ives began his expedition to the Colorado from Philadelphia on the east coast but needed his boat on the west coast.  he took the very practical approach of dismantling the boat and carrying it across the isthmus of Panama.  It was then reassembled for the journey up the Colorado River.

So Ives was certainly a talented engineer and logistician.  He travelled vast distances and produced reports of the geology as well as mapping out the Colorado.

The purpose of this series of blogs is to share stories related to botany, so where is the botany?  His report was split into several parts of which part 4 covered the botany of the expedition.  After the naive coloured plates of various native American tribes on the earlier pages I had some hopes for plates of plant illustrations however the best I could find was a landscape with some rather odd looking saguaro (Carnegiea gigantea).

But Ives has a standard form so he must have had enough interest in botany to publish some new names!?  There are indeed two new plant names in this book: Trifolium longipes var. pygmaeum (a new variety) and Sophia stenophylla (a new species).

In each case it is the very well known botanist Asa Gray who has provided the descriptions and names and Ives’ report in which they have been published.

The genus Ivesia (Rosaceae) was published in 1858, surely that celebrates this successful expedition? Sadly a dip in to TL-2 tells us that this was named after Eli Ives, a botanist and physician, so no luck there either.

So, we are left with the rather pretty Sophora stenophylla as a botanical memory of this great expedition and the unusual situation that Ives has a standard form name but has actually published no new taxa.

Clearly Ives achieved a huge amount outside botany and he does have an entry in TL-2 which is recognition in its own right.