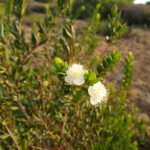 “And waving wide her myrtle wand, She strikes a universal peace through sea and land.” brings us to another story. The common myrtle, Myrtus communis (Myrtaceae), is a familiar garden plant in temperate gardens, especially in Europe and North America.  Its aromatic evergreen foliage and white flowers with tufts of stamens make it a very decorative garden shrub.  It’s not to be confused with crepe myrtle (Lythraceae) or creeping myrtle (Apocynaceae) which are also widely grown but unrelated and rather poisonous.

Scent of the mediterranean

Myrtle is a frequent member of mediterranean woodland and scrub extending from the Macaronesian islands in the West through to Asia in the East.  It’s shiny evergreen leaves release a rich oily smell that scents scrublands and woodlands in warm weather. Even in my rather colder british garden, myrtle fills the air with scent on warm summer evenings. The natural distribution of myrtle is intriguing as it occurs over a great distance but in widely separated populations.  This may be a product of its ability to persist over long periods in small areas and to disperse over large distances (Migliore et al. 2012), perhaps through its fleshy fruit.

Myrtle was grown in the Moorish gardens of Spain in the Middle Ages. It has been suggested that Sir Walter Raleigh brought it to the UK from Spain in 1585 but it could have been grown here earlier (Blakely, 2018).  By the 17th century, myrtle was being grown in the UK as an ornamental plant but usually protected in winter from the cold weather. It now seems very hardy, at least in southern Britain.

While Queen Victoria is said to have been decorated with orange blossom for her wedding, but her oldest daughter, Victoria, had Myrtle.  This is said to symbolize virginity and is often linked to the Virgin Mary (Robertson and Stokes, 1982). A myrtle bouquet given to Queen Victoria is reputed to be the source of the myrtles still grown at Osborne House (The Isle of Wight retreat of victoria,and Albert).  In the garden there is a plaque saying “This MYRTLE was raised from a sprig cut off the Nosegay presented to THE QUEEN on leaving GOTHA Sept. 3rd, 1845, by H.R.H. the DOWAGER DUCHESS OF SAXE GOTHA and ALTENBURG (Grandmother to H.R.H. the PRINCE CONSORT).” (Silverman, 2018).

We don’t have a family myrtle but we do have a family Aspidistra – and that seems to symbolise Victorian stuffiness (Patowary, 2019)! Having said that, ours is variegated so perhaps there is some hope for us yet?

For a more poetic read, have a look at the inspiration for this #AdventBotany blog – https://www.poetryfoundation.org/poems/44735/on-the-morning-of-christs-nativity.

Roberson, B. and Stokes, J. Jr. (1982) The Herbs and Flowers of the Virgin Mary. The Herbarist (reproduced at https://udayton.edu/imri/mary/h/herbs-and-flowers-of-the-virgin-mary.php)