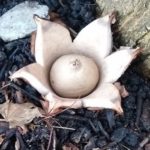 Today’s blog starts with a misquote of Matthew 2:9 and then wanders away from botany and on to mycology.  Yesterday I was sent a photo of some earth stars on campus.  This was exciting not only because it is a new species and genus record for the University of Reading, Whiteknights campus but that earth stars are not very common in the U.K..  Not only did the nature of the record cause surprise but the location too.  We have several areas of woodland dating back to the 18th century on campus that are rich in fungal species. The Marquis of Blandford (Later 5th Duke of Marlborough) developed the estate from 1798 through the next 21 years but then abandoned it after becoming insolvent and moving back to the family home of Blenheim Palace (Cooke, 1992). Much of the campus woodland dates from those early landscaping attempts. Was the new fungus in one of those woodlands?

No, it was under some maples planted by Whiteknights house, the administrative hub of campus built 1966-7 on the west side of the central campus (Holt, 1977).

The maples are on the right of the photo and are well established japanese maples with very nice Summer and Autumn foliage.  So what about the earth stars?  They seem to be around the largest of the three maples, the tree immediately to the right of the main building entrance.

These fungi were easy to miss among the brightly coloured fallen leaves but once seem it did not take long to realise there were many fruiting bodies.

But which earth star?

It’s a large species, its not growing in Wales, or Somerset, or Norfolk (and looks quite different to those very rare species).

Te breaking of the outer rays of the  fungus to leave a collar is also distinctive.

Based on this combination of features I’m fairly confident this is Geastrum triplex Jungh., infrequent in the UK, but not highly rare.

Todays Christmas star is therefore the collared, saucered, or triple earthstar depending on your favoured common name.