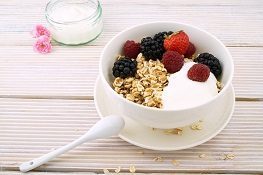 The consumption of yoghurt has been linked to healthier diets for children by a University of Reading study, which indicated that children eating at least 60g of yoghurt a day were shown to have better overall diets compared to those eating none at all.

The research, which has been published in the European Journal of Nutrition, shows that among the 1,687 children aged between four and 18 who provided dietary diaries, the highest consumers of yoghurt scored more highly on a Healthy Eating Index.

In particular, the children who on average ate around 100g a day of yoghurt – equivalent to around one small yoghurt pot per day – had significantly higher intake of vitamins A and C, and minerals including iodine from their whole diet. They also ate less processed foods including white bread, cakes and pastries.

Dr Ditte Hobbs, from the University of Reading’s Hugh Sinclair Unit of Human Nutrition, was lead author of the paper. She said:

“The findings are very interesting, showing a pattern between yoghurt consumption and an overall healthy diet which includes fruit, vegetables and fibre.

“Among the findings, we noted that among younger children aged 10 and under, those eating around 100g of yoghurt a day were consuming significantly less fat and salt than those who ate none.”

The researchers also found that yoghurt consumption was low among secondary school-aged children, with fewer than one in three (31%) of 11-18 year olds in the study eating any yoghurt at all.

“The nutritional information reported by the more than two-thirds of secondary school-age children who ate no yoghurt doesn’t make for happy reading,” Dr Hobbs said.

“Almost one in five was getting too little iodine from their diet overall, and one in six was not getting enough calcium.”

While the new study only looked at sources of nutrients, and did not measure specific iodine or calcium deficiencies in individuals, researchers have expressed concern that the results may indicate that high numbers of children may not be getting enough of these minerals, which are important for good health.

Professor Ian Givens, Director of the University of Reading’s Institute for Food Nutrition and Health, who co-authored the research, said:

“Research has repeatedly shown that dairy consumption among young people has been declining for many years, with a particular impact on amounts of iodine being consumed.

Health markers for children who took part in the study also show an association between good health and yoghurt consumption. Children who said they ate yoghurt had lower blood pressure and lower levels of glycated haemoglobin in their blood, which is used as a marker for diabetes.

Dr Hobbs said:
“This study was not designed to find a causal link between eating yoghurt and good health, and there are a range of other foods needed to make up a healthy balanced diet. What we have shown is that children who eat yoghurt tend to eat better in general, and that eating yoghurt can be part of a healthy diet for children.”

D. A. Hobbs, D. I. Givens, and J. A. Lovegrove, 2018, Yogurt consumption is associated with higher nutrient intake, diet quality and favourable metabolic profile in children: a cross-sectional analysis using data from years 1–4 of the National diet and Nutrition Survey, UK, European Journal of Nutrition, https://doi.org/10.1007/s00394-017-1605-x