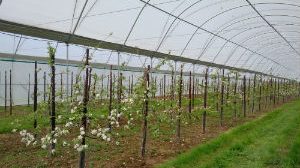 The home production of internationally-bred apples favoured by UK consumers might increase in Britain in future – as a result of climate change.

A warmer UK climate has already resulted in earlier apple flowering and harvest, and is enabling late-ripening apple varieties to be produced across more of the UK. Now, one of the largest climate change crop impact experiments in the UK is beginning at Brogdale Farm in Kent, funded by the National Fruit Collections Trust.

It seeks to learn how warmer temperatures and altered rainfall patterns, expected in future decades, will affect apple growth in England – potentially allowing popular international varieties like Granny Smith (Australia) or Golden Delicious (West Virginia, US) to be grown more widely in Britain and increasing UK growers’ share of the UK apple market.

Professor Paul Hadley of the University of Reading, and an NFCT Trustee, said: “Climate change is affecting top fruit already, but this is given less attention by researchers than annual crops. Our data shows that apple varieties are now flowering on average 17 days earlier each spring than 60 years ago.

“There are pros and cons to changes to apple flowering and harvest times, but these are likely to change the face of apple growing and lead to different varieties of UK fruit on supermarket shelves in the UK. This research will enable both professional growers and gardeners to learn how to adapt production techniques to cope with possible changes in the climate, and also identify varieties which are suitable for the UK’s future climate.”

Experiments at the National Fruit Collection, at Brogdale Farm near Faversham, are taking place in a new 0.6 hectare facility under polythene covers. Trees of more than 15 varieties of apple were established in 2014 and have been grown in modified environments since last winter. Traditional UK, such as Cox’s Orange Pippin and Bramley, and newer international varieties, such as Fuji, Gala and Golden Delicious, are included in the study. The experiments are planned to continue for at least a decade to monitor long-term changes and factor in year-to-year variation in ambient temperatures.

Some apples are grown under ambient conditions, while others are grown in climates either 2°C or 4°C warmer to simulate future warmer UK climates. Each is split with sprinklers providing actual rainfall, or 20% more or 20% less, to simulate changing weather patterns expected due to climate change.

The varying conditions produce diverse flowering and harvest times, as well as growth habits and winter chill requirement. Earlier blossom and harvest times may affect fruit quality and storage potential, but how significant these changes will be is not yet known.