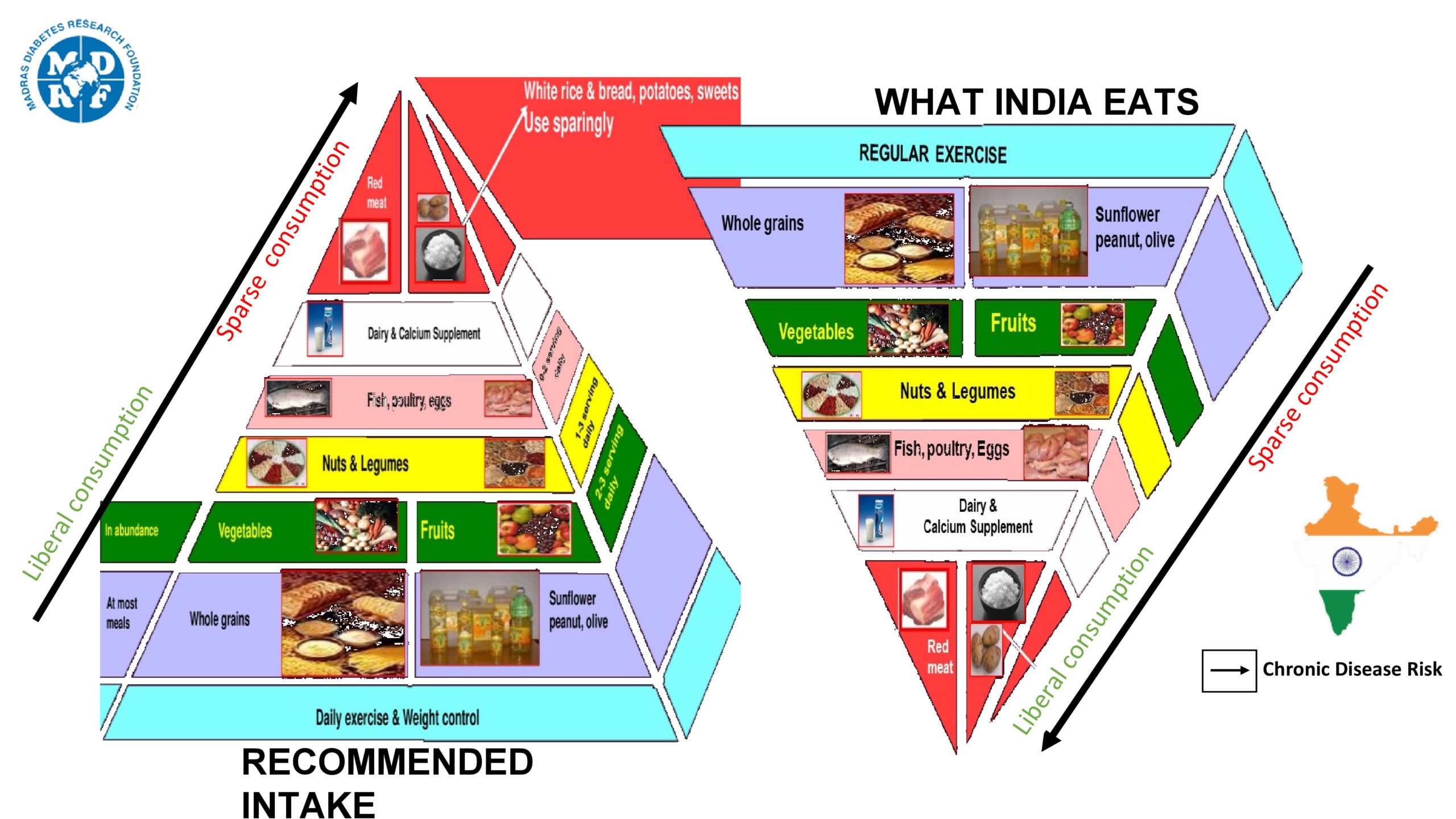 Diabetes is a chronic disease which is a major public health threat especially in the growing economies of the world. India, a nation with rapidly growing economy has undergone nutrition transition of over the last few decades progressing from active, predominantly vegetarian lifestyle to sedentary lifestyle with highly processed and low fibre dietary practices. Alongside nutrition transition the country also underwent epidemiological transition by growing out of a pattern of infectious disease into an epidemic of non-communicable diseases stemming from obesity. Urbanisation, industrialisation and globalization of the Indian society expanded the diabetes population of the country to the present 77 million, the second largest in the world. Falling in line with united nation’s sustainable development goals (SDG) for research and innovation for mitigation of chronic disease related mortality, our research practices have been continually providing evidences for dietary practices- a powerful pillar and primary step in the prevention, management and even reversal of type 2 diabetes (T2D).

In the early years of the 20th century, to understand the various aspects of the growing prevalence of diabetes in India, the Chennai Rural Urban Epidemiological Study (CURES) was designed- a cohort that was followed for more than a decade. Findings from the study were notable in providing dietary evidences on increasing prevalence of diabetes in both rural and urban economies of the country. As the country had transitioned from its whole cereal consumption patterns to refined cereal consumption, results from our study revealed that the refined grain intake was positively associated with the risk of T2D (OR 5.31 (95 % CI 2.98, 9.45); P < 0.001). Furthermore, as a food group- dietary carbohydrate intakes predominantly contributed by polished white rice showed risk for T2D and so did the glycaemic index and load of foods. This risk remained despite the inclusion of fruits and vegetables in the model. We also concluded that consumption of fruits and vegetables conferred 48 % protective effect against CVD risk factors; an important finding especially for a country where the prevalence of premature death due to CVD is high.Understanding the preventable dietary risk factors for T2D we inferred from a 10 year follow up that intake of monounsaturated fatty acid (MUFA), fruits and vegetables and dairy consumption was protective as quartiles of consumption increased . Despite the emergence of carbohydrates as the predominant contributing nutrient to risk of T2D, the impact of quality and quantity of dietary fats cannot be overlooked. Therefore, we assessed the same in the CURES cohort and identified that the intake of  MUFA was much lower than dietary recommendations for the country and as opposed to intakes of saturated fatty acid (SFA) and polyunsaturated fatty acid (PUFA) it was negatively associated with the risk of T2D. Appropriate use of cooking oils, cooking methods and encouraging the inclusion of nuts and oilseeds emerged as effective dietary strategies to mitigate chronic diseases in the population.  Following the curiosity to achieve the least risk conferring diet for T2D, we developed a Food-Based Indian Diet Quality Score (IDQS) where the food groups were scored and this study was helpful to conclude that diets with the highest IDQS had the lowest risk of T2D. The individuals who had highest IDQS scores had lower intakes of nutrients such as energy, carbohydrates (g/day and %E), glycaemic load, glycaemic index, protein (g), (g) especially linoleic acid, MUFAs (g), and sodium (mg/day) and among food groups, intake of white rice (g/d), edible oils and fats (g/d), animal foods (g/d), poultry and egg (g/d), added sugar (g/d), and sugar (%E) were lower. Studying the same cohort we have also been able to understand  the incidence of hypertension  and cardiovascular diseases in association with dietary factors. The prevalence of hypertension was positively associated with intake of dietary salt  which was much higher (8.5 g/d) than recommended intakes in the studied cohort. In addition, the inclusion of salt >1 teaspoon/day (compared to zero added salt) at the dining table was also associated with the increasing  prevalence for hypertension .